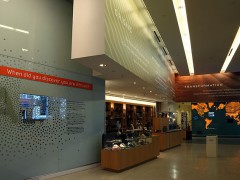 This article was originally drafted by the SA Node of the Millennium Project for the newsletter “Southern Africa Horizon Scan” as part of the Rockefeller Foundation’s Searchlight Process. For more Searchlight content on futurechallenges.org, please click here.

An opinion piece by Chukwu-Emeka Chikezie who is  a co-founder of the African Foundation for Development (Afford), and a consultant and writer on international development

Contrary to popular myths, Africa’s migration is overwhelmingly regional – much more of a cross-border affair than a cross-Atlantic one. In truth, though, we need to unravel “the diaspora” – the term implies homogeneity of actors, motivations and life-stages, when nothing could be further from reality.

Moreover, African migrants and diasporas – no matter where they are – find themselves slotted in at varying points on a spectrum of skills: from the high-rolling investment bankers of Wall Street and London to the army of office cleaners you might see teeming most western cities at ungodly hours of the morning. The PhD-holding Ghanaian New York cab driver is a bit of a cliché, but the ‘brain wastage’ of high-skilled Africans – putting aside what they’ve learned at university to deploy a whole new set of skills where there’s demand – is very real. Museum of the African Diaspora in San Francisco. By Caroline Culler (Wgreaves) (Own work) [CC-BY-SA-3.0 (www.creativecommons.org/licenses/by-sa/3.0) or GFDL (www.gnu.org/copyleft/fdl.html)], via Wikimedia Commons

So the returnees are a mixed bag indeed. Those from western countries may be the most visible and vocal, but they are not the most voluminous in numbers. The challenge is absorbing this mass of human resources into productive endeavour in their countries of origin. The paradox for most African countries is that those most in need of their returnees’ skills are usually those least equipped to utilize them. Institutions are weak. People hold on to positions not because of merit but because of connection. They don’t want a high-skilled returnee actually getting the job done and making them look as hopelessly incompetent as some are.

In a book of essays he edited called Diaspora Networks and the International Migration of Skills, World Bank economist Yevgeny Kuznetsov points out that barring a few notable exceptions – such as China and India (but one might add Taiwan) – most countries have so far failed to realize the promise and potential of their skilled diasporas. Apart from all the institutional and developmental challenges that make it hard for anyone – diaspora or otherwise – to be productive in those countries, the maturity of the diaspora itself is also a key factor, Kuznetsov argues.

In his view, “Africa’s development isn’t a question of either home-grown Africans or the diaspora but “both and”: what we need to see is the blend of talent that works in the specific contexts of individual African countries starting from where they are. For this to happen, African countries need to pay attention to what elsewhere colleagues and I have coined the “3Rs” of retention, return, and retrieval. By far, retention is the most important – make Africa a comfortable and productive place for the citizens who live there now and very soon the news will reach the diaspora. Some will want to return (permanently) and others will offer what they have on a more flexible “retrieval” basis.’

The African diaspora, for its part, can do much more to achieve effective return and retrieval. The most important thing is to get organized, while in the diaspora, while managing the return process, and after having returned or while engaging in retrieval strategies. Nowadays, there are countless African diaspora networks with a degree of experience and maturity to offer something. But if you don’t see anything that works for you, create one. Recently, a group of returnee Sierra Leoneans has formed The Returnee Group (TRG) to help ease the transition process for returnees and would-be returnees. These are the sorts of innovations that will hopefully facilitate and accelerate the successful return of Africa’s diaspora and their contribution to Africa’s deserved place in the 21st century.