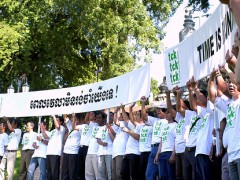 This article was originally drafted by Rob Jamieson and Indochina Research for the newsletter “I-Light” as part of the Rockefeller Foundation’s Searchlight Process. For more Searchlight content on futurechallenges.org, please click here.

Non-government organizations have been a major feature of Cambodian life for over two decades, having a profound influence on the county’s development. Yet Chum Samnang, in NGO Coordination and the Changing Aid Environment in Cambodia, has characterized Cambodia’s sector as immature and weak.

While identifying cultural, political and institutional challenges, along with poor coordination between national and provincial levels, he says it is largely because the international NGOs, the key players, shape the work and projects of the local Cambodian NGOs in a topdown manner. At best, they are project-based and results-oriented and geared to donor funding rounds. As a result, they often lack a concrete institutionalized framework to achieve long-term goals.

Samnang says this has resulted in the absence of a collective voice, the fragmentation and duplication of NGO projects, little understanding of aid effectiveness, and often, poor engagement in coordination mechanisms. While there are a number of organisations designed to share ideas, talk about joint strategies, and encourage greater coordination between NGOs, there doesn’t appear to be enough coordination, he says, especially at the community level.

Even getting the input from the numerous NGOs working here for this paper has proved quite challenging, as if there is a form of omertà operating in the sector. When they did reply to questions, too often the answers were little more than boilerplate, providing few genuine insights. There is also a problem of “ownership” by local NGOs, as many here were established by foreigners, are often managed by them and frequently reflect Western imperatives. A survey of local attitudes to NGO effectiveness by Indochina Research found that, while most have a generally very favorable view of NGOs, many respondents had only a hazy idea of what they actually did. One of the challenges with localization, moreover, is that local managers may not necessarily share Western values. For them working for an NGO is a career opportunity and even, if the chance arises, a way to make a fortune. Recently, an NGO involved in sanitation discovered that its newly-appointed Khmer manager was setting up his own manufacturing unit to produce concrete septic tank units to sell back to the organisation. He was mystified when they objected. There may be unintended consequences, such as when an NGO aimed at reducing the “digital divide” set up shop in Cambodia and offered point-of-sale software services to retail businesses. As a “social enterprise”, they were able to undercut the commercial competition because donor funds meant they didn’t need to turn a profit, giving them an unfair advantage over commercial operators.

A common criticism is that NGOs in Cambodia offer community services that the authorities should be responsible for, so the link between government services and accountability is not established. US-based Khmer author and academic, Ear Sophal, insists that donor money is therefore undermining the development of democracy and civil society in Cambodia by limiting the ability of the electorate to hold its representatives to account. In May 2009, U.S. Ambassador to Cambodia, Carol Rodley, calculated that around USD700 million a year of foreign aid is lost through graft.

The crux of Sophal’s argument is that aid means both government officials (and the public) regard the money as a gift rather than something that they either contribute to or need to be accountable for. This cuts to the heart of one of the key elements that support the democratic process: that officials are given the discretion to spend public moneys so long as they do so in ways that collectively benefit the public – and can be thrown out if they fail to do so. In Cambodia’s Curse, Joel Brinkley goes further that, Sophal and accuses the international donors and INGOs of complicity in the current state of systemic corruption within Cambodia by failing repeatedly to hold the government to account. This is because virtually all funding for aid programs is determined by foreign policy imperatives rather than whether the aid is effective.

Sophal says that rather than create the circumstances where aid dependency can flourish, it is essential for a country to strive for self-reliance (eschewing aid dependence) so that the conditions for genuine economic development take place. This can create a sustainable trajectory—similar to what Korea and Taiwan experienced. These are lessons that Cambodia should learn.