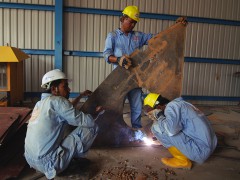 This article was originally drafted by Dr. Apiwat Ratanawaraha and Noviscape for the newsletter “Trendnovation Southeast” as part of the Rockefeller Foundation’s Searchlight Process. For more Searchlight content on futurechallenges.org, please click here.

Deliberate industrial agglomeration has been part of industrial policy in Southeast Asia since the 1970s. There are currently more than 200 industrial parks in Indonesia and more than 50 in Thailand, many of which are developed and operated by the private sector. The concept of the industrial cluster came later in the 1990s, which aimed at promoting geographical agglomeration of inter-connected and competing firms that would share commonalities and complementarities. Workers at a shipyards in Kabil, Batam, Indonesia. (Photo by John Payne from flickr.com, CC BY-NC-ND 2.0)

From agglomeration of factories to that of R&D and creativity

The target for clustering policy is now shifting from manufacturing activities towards R&D for high-technology products and innovations. All middle-income countries in this region now have technology and innovation parks of some sorts. Policies to promote creative clusters are also popping up in many cities. To name but a few, Bangkok and Chiangmai in Thailand, Bandung and Bali in Indonesia, and Cebu City in the Philippines all promote a wide range of creative industries from traditional handicrafts and fashion design to software, animation, and movies and music. Policy instruments have been adopted, and new agencies devoted to promoting clusters of creative firms have been established, such as the Thailand Creative and Design Center (TCDC). Indonesia has even changed the name of its Ministry of Culture and Tourism to the Ministry of Tourism and Creative Economy. The efforts have created policy buzz, but the challenge still remains as to what extent the shift in policy interest toward creative industries truly benefits the majority of people in society.

Despite the obvious connection between innovation, creativity and physical configuration in cities, the overall innovation policies in most ASEAN countries have not integrated innovation policies with those for urban development. Virtually all ASEAN countries have established science, technology, and innovation parks, but they were developed with little consideration of the urban environment as a whole. Science and technology parks are often geographical enclaves of scientists and engineers, located in the suburbs and exurbs. Policies and strategies for industrial clustering need to be translated into urban development requirements to fulfill specific targets that city planners must deliver.

The big question mark for the clustering effort is about its contribution to society, particularly the poor. One concern is that the policy obsession with industries that require high skills and a specific type of creativity would benefit only people who can afford to go to universities and design schools.

Another concern is about bias towards megacities, which tend to benefit greatly from clustering policies, further encouraging migration. Even for initiatives that attempt to integrate industrial clustering with urban development, such as Malaysia’s Cyberjaya in the Multimedia Super-Corridor, the attitude of “build it and they will come” has not led to an increase in innovative capacity and benefits for wider economic and social development.

Science and technology agencies will play critical roles in enhancing production capabilities of firms in industrial clusters. For instance, Thailand’s National Science and Technology Development Agency (NSTDA) has developed technology roadmaps for some of the industrial clusters, such as shrimp and rubber clusters, and has set up its internal R&D clusters with corresponding industries. A cluster within NSTDA is devoted to “resources, rural development, and the disadvantaged people”, with one of the missions being to develop and transfer technologies for rural clusters. It remains to be seen how socially inclusive this R&D initiative will become.

Another note-worthy variant of the clustering effort that attempts an inclusive and comprehensive approach to economic development is Thailand’s One Tambon One Product program, in operation since 2002.  The program encourages each Thai tambon (sub-district) to identify locally made and unique products, and provides programs to facilitate marketing and certification as well as knowledge sharing.

Brookera, D. 2012. “Build it and they will come”? A critical examination of utopian planning practices and their socio-spatial impacts in Malaysia’s “intelligent city”. Asian Geographer, 29(1), 39-56.