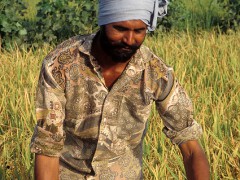 India has recently witnessed a trend of collective marketing that could impact the lives of millions of small farmers and fishermen across the country by bettering their standard of living. Mr. Sawran Singh, a farmer from India who rotates rice with peas. (By IRRI Images from flickr.com, CC BY-NC-SA 2.0)

Most of India’s farmers fall under the category of small and marginal. Over the years, small and marginal farmers have faced lowered bargaining power, smaller landholdings, increasing cost of storage, inadequate knowledge of the market and exploitation at the hands of various middlemen.

One of the primary means through which the collective marketing model is being implemented is through cluster development. In this model, market linkages are developed for clusters of farmers. In 2010, the Uttarakhand Livelihoods Improvement Project for the Himalayas (ULIPH or “Aajeevika”) launched an initiative in the Gadoli-Gangtari cluster (pea farmers) of its self-help group (SHG) Saptarishi Swayatta Sahkarita. This initiative was aimed at the collective marketing of the cluster’s product (peas) and to cut out middlemen. ULIPH, managed by the Uttarakhand Gramya Vikas Samiti (UGVS) and the social venture capital company UPASaC, helped the Saptarishi Swayatta Sahkarita set up collection centers around their cluster. These centers are equipped with weighing machines and a transparent MIS for recordkeeping. As a result, farmers have been able to receive payments for their sale the same evening.

In 2007, the tribal floriculturists of Vikramgad, Thane district in Maharashtra state, formed the Vrindavan Pushpa Utpadak Sangha, a flower growers’ collective with help from Maharashtra Institute of Technology Transfer for Rural Areas (MITTRA). The produce is collected at the Vikramgad bus stand and transported to the nearest flower market that offers good rates with the Sangha bearing the transport costs. Payment is made to the Sangha on a monthly basis in cash and deposited in the Sangha’s bank account. The Sangha has a secretary to keep records. Initially, MITTRA helped maintain records, but it is done now by the Sangha. Farmers talk about the changes in the weather and how they are trying to adapt in Bhoda Village, Punjab, India. (By CGIAR Climate from flickr.com, CC BY-NC-SA 2.0)

The Orissa Tribal Empowerment and Livelihood Project (OTELP) partnered with the Marketing and Reach Team (MART), an organization specializing in marketing, to help tribals of Panguda, Tamuisingi, Kanda Parsamba and neighboring areas in Orissa to form collectives to market their produce, mostly vegetables like jackfruit and pumpkin. MART’s “Collective Marketing Model” was replicated under the OTELP to cover 396 villages. With collective marketing soon becoming a means to empower small and disadvantaged farmers, even foreign organizations have entered the fray; organizations such as DFID, UNDP and IFAD, in partnership with central or state governments have launched collective marketing programs in the states of Orissa and Jharkhand.

If this trend is provided with sufficient impetus from the government, NGOs as well as private sector, it has the potential to impact thousands of rural farmers by helping them gain better returns for their produce in the next 5-10 years. The collective marketing model has the capacity to provide small farmers across the country with access to economies of scale through savings on costs such as transportation, and storage as well as the removal of middlemen. Since such a model would provide them with better market information, it would also equip these farmers with improved bargaining power for the prices of their products. Such collectives could also help farmers with financial access and credit facilities.