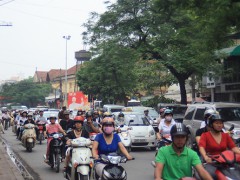 This article was originally drafted by E. Phoutsavath and Indochina Research for the newsletter “I-Light” as part of the Rockefeller Foundation’s Searchlight Process. For more Searchlight content on futurechallenges.org, please click here.

The economies in Indochina are soaring, their urban populations are swelling and their traffic flows are on the rise. Urban migration, the rise in wealth and the increase in imports of vehicles from abroad means there are more vehicles on the road in Indochina than ever before. Gone are the days when you could have a pleasant and peaceful cycle around towns and cities; Chinese motorbikes, trucks and SUVs now dominate the roads. With the development of the region, those who owned bicycles now own motorbikes, and those who owned motorbikes now own cars. However, many people drive motorbikes without a license or insurance, and drunk driving is common. These concerns have always been present, but with the increasing traffic on the roads, it is now becoming a critical issue in the region.

The number of fatal road accidents is increasing at an alarming rate. There were 1,644 road accidents in the capital of Laos alone in 2011, which left 205 people dead. According to Handicap International, most fatal accidents occur when drivers are drunk, when motorists don’t obey traffic regulations and when motorcyclists don’t wear helmets. In Viet Nam, 16 people in every 100,000 die in road accidents every year.

A congested street in Hanoi, Vietnam (By Leo Fung from flickr.com CC BY 2.0)

A related issue—air quality— has been identified by the Organisation for Economic Co-operation and Development (OECD) as being a serious threat to human health, with particulate pollution expected to kill 3.6 million people annually by 2050. Particulate Matter (PM) is tiny airborne particles, formed by the reactions between vehicle emissions and the air, or generated by dust from unpaved streets, for example. Four out of the ten most polluted cities worldwide, in terms of PM levels, are located in East Asia. There is also emerging evidence published in the Journal of the National Cancer Institute that diesel emissions can increase the risk of cancer three-fold (March 2012). Air quality exceeds safety standards in the majority of developing Asian cities, with the most recent World Health Organization assessment finding that 800,000 people die prematurely each year in Asian developing countries as a result. Air pollution tends to pale into insignificance against the other health concerns in the region such as malaria and diarrheal diseases. However, the OECD has estimated that more people will die as a result of air pollution than malaria or poor access to clean drinking water combined in the next few decades. Now is the time to strike at the heart of the matter, to control air pollution before it gets any worse.

Key proposals from the Strategic Framework for National Sustainable Development Strategy in Laos (2008) were to manage urban air quality to international standard and to find the best alternative transport – such as a public transport system, fuel substitution and using environmentally friendly vehicles. Air quality was also identified as one of the top six priorities to be addressed by the Regional Forum on Environment and Health in Southeast and East Asian Countries in 2010, covering Lao PDR and neighboring countries. There seems to be increasing political will in Asia to address air pollution, but it currently lacks broad based popular support, making it difficult to succeed. There is little incentive for a paradigm shift in road usage at present, as public transport is not an option for many. Faced with standing on the side of a dusty street in a sweltering 35 degrees, waiting for a bus which is not air-conditioned and has an erratic timetable is little substitute for the emerging wealthy population who can afford their own air-conditioned car.

It is a common story in developing countries that social and economic improvements lead to transport growth in terms of more passenger and freight-ton kilometers. With higher per capita income comes increased use of private cars and motorbikes and with increased trade comes expanded road haulage, especially in countries such as Laos where there is currently no railway. The Lao Government itself has plans to turn Laos from a landlocked country into a land link, which in turn would facilitate Lao manufacturers to export their goods to the world market. It is, however, of key importance that the goal of economic growth and poverty reduction is not achieved at the cost of air quality and road safety which, if allowed to deteriorate further, will increase the risk to public health and undermine the future sustainability of the region.