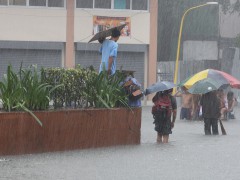 This article was originally drafted by Colonel Dr. Teeranan Nandhakwang and Noviscape for the newsletter “Trendnovation Southeast” as part of the Rockefeller Foundation’s Searchlight Process. For more Searchlight content on futurechallenges.org, please click here.

An Invisible Threat: A Shift towards Non-Traditional Security

Telecommunication and the internet can facilitate communication across time and space. The world already changed when an ordinary individual became capable of accessing, sending, and receiving information much faster than ever before. The new occurrence of new media makes it possible for anyone to create, modify, and share content with others, using relatively simple tools that are often free or inexpensive. New media merely requires a computer or mobile device with Internet access. Flooding in the Philippines. (By Kris Carillo from flickr.com, CC BY 2.0)

This rapid growth in the digitization of nations has significant implications to national security in an unfamiliar manner–particularly when we take mother earth in to the calculation. For example, a natural disaster already presents new threats to Southeast Asian security, particularly to society and livelihoods. At this moment, the authorities are still focused on physical mitigation to these threats. These can be seen from the recent haze fire situation in Indonesia and Thailand, and flood management in the Philippines and Thailand. Any individual with a personal wireless or internet access and disaster management agencies, become very vulnerable when they are faced with telecommunication failures. Most of the post-disaster management priority addresses reestablishing services after the impact, while anticipating the impact of disasters on computer networks, particularly on the possibility of a disaster that may trigger additional disasters that may lead to more network failures, still receive very little attention (Abbas et al., 2012). In this sense, a natural attack will be another major source for cyber security in the region.

An ongoing increase in non-traditional incidents and threats to security are growing. Most of the governments of many countries have been using national security as a major school of thought (See Figure 1). However, the security sector is still the mechanism to engage with the threats. Whether traditional threats or non-traditional threats, they are using the same means by blocking and censorship.

Countries may filter sensitive content on an ongoing basis and/or introduce temporary filtering during key time periods such as elections. In some cases the censoring authorities may surreptitiously block content to mislead the public into believing that censorship has not been applied. The extent of Internet censorship varies on a country-to-country basis.

For Cyber Security reasons, government, civil society and Netizens should find any means possible to deal with the issues together. Censorship Policy may be fine with mainstream media, but it works only for some cases on Cyber Society. Many scholars have proposed the concept self-regulation to organize Cyber Society; however, there are no concrete solutions. Whenever people realize more that Security Awareness is vitally important, stabilizing Cyber Society will take place, and then, Cyber Society will become secure. People will prepare themselves for responding to the new threats. Consequently, these will be a foundation for self-regulation and help to increase the level of Cyber Security in the near future.

Comber, L. (2009). The Origins of the Cold War in Southeast Asia: The Case of the Communist Party of Malaya (1948-1960): A Special Branch Perspective, ISEAS Working Paper: Politics & Security Series No. 1. Retrieved from http://www.iseas.edu.sg/ips12009.pdf

Doherty, B. (October 21, 2010). Silence of the dissenters: How south-east Asia keeps web users in line: Vietnam, Burma, Thailand, Cambodia and the Philippines are all moving towards Chinese-style internet censorship, The Guardian. Retrieved from http://www.guardian.co.uk/technology/2010/oct/21/internet-web-censorship-asia