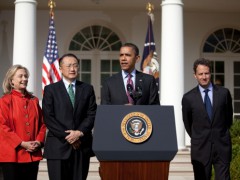 This article was originally drafted by the Foro Nacional/Internacional for the newsletter “South America: Trends and Change for Development” as part of the Rockefeller Foundation’s Searchlight Process. For more Searchlight content on futurechallenges.org, please click here.

This election of Jim Yong Kim as President of the World Bank gained high-profile in times when multilateral development banks’ (MDBs) relevance is under examination —particularly for middle-income countries that are able to mobilize resources from different sources, such as international and domestic capital markets, as well as from their tax base. The dense network of MDBs in South America comprises the World Bank (WB), the Inter-American Development Bank (IADB), and sub-regional banks such as the Andean Corporation of Finance (CAF), La Plata Basin Fund (FONPLATA), the Central American Bank (BCIE) and the Caribbean Development Bank (CDB). A competitive and decentralized environment in the region is promoting innovations in three areas: private sector financing, support to sub-sovereign entities, and result-based fiduciary funds. Regional infrastructure is one area where MDBs have comparative advantage. MDBs usually directed loans to governments for regional infrastructure, but they have made operative several financial instruments to mobilize capital markets and private investment such as guarantees, private-public partnerships (PPP), syndicated loans, private equity, among others. Their capacity to structure financing, in addition to their closeness with governments, gives an extra assurance to private investors that projects will follow through. For example, the Initiative for Regional Integration Infrastructure in South America (IIRSA) is a comprehensive plan to develop gas, transport, and communication networks in the region. The IADB used to be the main donor, but CAF now structure finance for companies to participate in PPPs, covering a significant part of project costs with capital market resources. Overall, IIRSA has a portfolio of 524 integration projects for US$96 billion in nine multimodal integration networks. Another emerging area in private sector operations is the support to improve the business environment and promote entrepreneurship and SMEs development.

Creating public administration capacities is another area of comparative advantage of MDBs. The next group of clients will be sub-sovereign entities and MDBs are creating instruments to attend this emerging demand. Cities are growing and require to improve their infrastructure. The IADB has strengthened their country offices, and now provides loans for infrastructure to cities with national sovereign guarantee, such as the recent loan for a public transportation networks to Lima; and Arequipa is also requesting financing for a similar transportation network. In the following years, some cities in the region will have loans with MDBs without sovereign guarantee, and they will be able to mobilize resources directly from domestic capital markets or with MDBs support. For this aim, MDBs are designing programs to improve city management capacities, such as the IADB’s “Ciudades emergentes” program which also mobilizes resources from foundations, private sector and other banks to improve infrastructure and public sector management. The pilot phase was launched in five cities and will expand to 26 cities —at least one interior city in each IADB’s borrowing country.

MDBs also generate resources from their investments and loans. During the last five years, most MDBs in the region allocate most of their net income to reserves, thus increasing their capital base. But they are allocating more resources to their concessional lending window or increasing donations through fiduciary funds with specific purposes. Again, the IADB is leading this trend with the allocation of US$200 million per year to a common-pool-fund for Haiti, which bilateral donors are increasingly supporting. CAF has also increased its lending capacity and it is now creating several funds with the support of bilateral donors, particularly for technical assistance —an area where the IADB and the WB has traditionally led.

Middle-income countries in the region now have better access to domestic and international capital markets, sometimes at comparable or even better financial conditions than MDBs. Nevertheless, this has been the reality for emergent LAC countries and MDBs have evolved to attend different demand patterns such as knowledge-based services, research, monitoring and evaluation, and technical assistance. MDBs are still relevant in financing infrastructure projects —there is a large infrastructure gap in the region—, but it will be more common that these institutions act as catalyst and mobilize resources from private companies. In the region, MDBs are leading innovations and act as platforms to spread knowledge through their technical assistance windows, and external donors utilizes MDBs capacities to scale up their cooperation programs. Therefore, MDBs are progressively finding more balance between their financial function and other more valuable for countries in the current reality: knowledge-based interventions and the provision of regional public goods, such as infrastructure for integration.