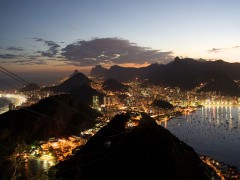 This article was originally drafted by the Foro Nacional/Internacional for the newsletter “South America: Trends and Change for Development” as part of the Rockefeller Foundation’s Searchlight Process. For more Searchlight content on futurechallenges.org, please click here.

The middle class in Central and South America is projected to grow 75 percent, to 313 million people, between 2009 and 2030. Out of these middleclass citizens, 60 percent will be Brazilians by 2030, when Brazil becomes the world’s fourth-largest economy, behind China, the US and India. Brazil is already a success story. Ms. Dilma Rousseff, President of Brazil, indicated that between 2003 and 2011, 40 million Brazilians moved out of poverty and into the middle class, with access to health, education, credit and formal employment. Brazil will present a conceptualization of the Brazilian model at the Rio+20 Global Conference in June 2012 and it is ready to exercise its soft power in the coming years. Nevertheless, the sustainability of this model has been the subject of broad debate.

For this article, we have reviewed opinion articles about the prospects and challenges of a growing middle class in Brazil in order to identify signals regarding the sustainability of the Brazilian model —a model that could become a public policy blueprint for other South American countries. Such an extensive topic requires a preliminary exploration of views from a broad set of actors and their perceptions, grouped around three issues: definitions, consumer potential and influence in politics and public policies.

By many standards, Brazilian middle-class is poorer than you think. Class “C” has an official definition of a combined monthly family income between US$600 (R$1,000) and US$2,400 (R$4,000), but only one third of them consider themselves part of the middle-class. This is standard in other countries: the Pew Research Center (2008) found a strong correlation between respondents’ family income and their estimate of what it takes to lead a middle-class lifestyle in the United States: the greater the income, the higher the estimate. It is aggregate consumption what matters in economic terms. Total consumption of Brazilian families amounted to US$1.3 trillion (US$ R$2.2 trillion), of which 46 percent is middle-class consumption—slightly higher to that of the AB class, 11 percent of total population. Data popular, a consultancy firm, has estimated that 20 percent of the class C families (18 million) are planning to buy a house in the coming five years, and 10 percent will buy a used or new car in the next 12 months. Differences between families within class C reflect wider social inequality: if buying consumer goods brings them closer, income and education indicators still separate them. Easier access to credit explains why Brazilians are acquiring more consumer goods. Nevertheless, their consumption patterns are highly vulnerable: class C lost nearly two million people to class DE after the financial crisis. Inflation and over-indebtedness may become a threat to their future consumption.

In political terms this entails that the middle-class will constitute 60 percent of the voters in 2014. So far, targeted social programs promoting social mobility and credit access have increased consumption. The effectiveness of such strategy diminishes as the economy grows more complex in middle-income economies, and voters’ preferences change as globalization affects the economy, perception and aspirations of the middle-class. Therefore, a new set of policies is emerging to protect and expand their consumption, even in times of uncertainty about future economic growth. The government has reduced interest rates of microcredit from 60 to 8 percent to increase consumption, even at the risk of inflation or over-indebtedness. It has also applied more targeted measures, such as reducing taxes on electric appliances from 20 to 10 percent. The President Rousseff has a different approach than that of the previous administration: social programs will evolve from supporting income to help families’ acquisition of assets and has initiated a program to build two million homes until 2014.

Such impressive growth comes with new social tensions and challenges for public policy-making. As an example, upward mobility has improved the situation of nannies, and several middle-class families have found that they cannot afford employing one anymore. In general, economic and social tensions, even racial ones, may arise as the mobility of social classes increases. Macroeconomic imbalances from double-digit consumption growth may surge if fundamentals change due to external shocks.

Middle-classes are growing and they should be aware of the type of tensions that surge as a consequence. There is evidence that Peru is experiencing a similar process of middle-class growth and expansion of their consumption. This is why is important to understand what is happening in Brazil, and monitoring the effectiveness of their policies, in order to provide lessons for other countries.