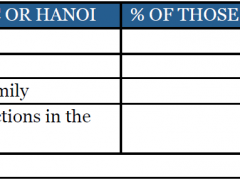 To understand the views held among the urban poor in Vietnam on a variety of topics, we undertook a survey whose results are reported below. The topics included:

55% of respondents work for themselves or their family and 45% work for someone else by choice.
50.5% of respondents have moved to either HCMC or Hanoi from somewhere else. This represents a migration shift to the largest urban areas in Vietnam. Those who moved to these main areas have done so primarily for financial considerations and opportunities. The reasons are as follows:

While those who have moved to the city saw financial opportunities and better access to services in Hanoi or HCMC, most feel that support is missing from the public sector or wider benefits available to them or their families.

Seventy-six percent of respondents have borrowed money from a range of sources, but friends or family remain the most relied on source when borrowing (85.6%). Other sources such as informal money lenders and commercial banks do not necessarily have the lender’s interest as a priority, particularly related to the cost of funding.

It can be seen that the reasons for borrowing money are largely to meet immediate living needs such as housing, health, family and education costs. Doing business is a relatively low priority compared to survival.