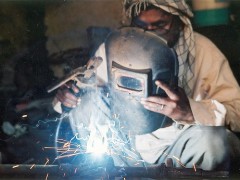 Recent attempts to enable poor workers employed in manual labor jobs to access job postings and listings via information and communication technology (ICT) are likely to have a positive impact on their economic circumstances in the coming years.

Around 370 million workers in India are employed in blue-collar jobs involving manual labor including construction, agriculture, and service providers like laundrymen and helpers. People from disadvantaged backgrounds in both rural and urban areas find it difficult to access such jobs because of lack of awareness and connectivity. In the past few years, many vendors have started to streamline the availability of these jobs through ICT. A welder at work in India (by Vincent Desjardins via flickr.com CC by 2.0)

One such venture is NaukriSMS which uses mobile technology. It is currently run by a venture capital fund and is available free of cost to job seekers. It has engagement officers who help the jobseeker register with the NaukriSMS mobile job alerts facility through which they can receive a voice or text message regarding job opportunities which match the profile submitted. Because of the prevalence of mobile phones among Indians, they are useful tools to find employment (by Arpana Sanjay via flickr.com CC BY-ND 2.0)

Another similar venture is called Saral Rozgar, started by Tech Mahindra’s unit CanvasM Technologies Limited which works on voice-based utility services. It seeks to link both job seekers and job providers in a common online database giving them access to each other’s information. The job seeker can sign up for this facility in two ways – one, by directly signing up on the website, or by calling the customer care center where an executive takes down details and creates a profile on the job seeker’s behalf. Job providers are required to pay to access the seeker’s contact details and initially, the job seekers get free updates. Between June and September 2011, Saral Rozgar had served around 30,000 blue-collar workers across the country.

It was awarded “Excellence in Innovation with Rural Telecom Focus” at the National Telecom Awards in 2011.

There are more such programs in place like Kaam Karo India which also offers to get a police verification of the workers employed by the job provider. Labour Connect is another website launched by NASVI (National Association of Street Vendors of India), and NIDAN, an NGO based in Bihar in 2012. This is a complete online portal; engagement officers collect information both about laborers and jobs available. It has been started on a pilot basis in National Capital Region, Delhi. Labour Connect has also conducted jobs fairs for slum youth. Such programs have been successful in replacing the broker to a certain extent. Although these programs provide more integrated information, the fee that they charge could act as an impediment to their reach amongst the poor. Saral Rozgar already charges its users and NaukriSMS plans to scale up the project in the future by doing so. Also, the programs are spread out at various places across the country and hence, their impact is hard to evaluate. Foundations can foster linkages between the public and private sector as well as NGOs to streamline this process. The impact of these programs in providing sustainable jobs is another parameter which will have to be evaluated independently.