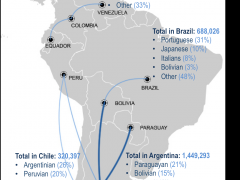 This article was originally drafted by Fernando Romero and Ángela López and the FORO Nacional Internacional as part of the Rockefeller Foundation’s Searchlight Process. For more Searchlight content on futurechallenges.org, please click here.

South American countries are becoming more attractive to live and work. A group of governments has launched programs to bring back their compatriots, but these plans have had little success. The reason is that some traditional migration patterns in the region are rapidly being replaced.

According to the latest reports on migration trends of the Organization of American States (OAS) and the International Organization for Migration (IOM), there are three factors behind changes in migration patterns in South America: the financial crisis of 2008, the surge of regional economies, and, in general, few restrictions to migrate to South American countries. Since 2009, a group of countries has become net recipients of migrants. This is a notable result in a region whose population has usually moved abroad in great numbers, particularly to the U.S. and Spain.

Migration among South American countries has intensified. Argentina, Brazil, Chile and Venezuela are now popular destinations for immigration from adjacent countries. Figure 1 shows the migration corridors that the IOM has identified around these four countries. Moreover, the World Bank bilateral migration matrix indicates that Argentina and Venezuela have the largest stock of South Americans migrants. Some countries have launched return migration policies, but their impact over migration trends is minimal. Among them, the most recognized is Ecuador’s Welcome Home Plan (WHP). It was launched in 2008 and provides tax incentives and seed capital for returnees through the Cucayo Competitive Fund. However, WHP has had low impact yet: only 1,719 people applied between 2007 and 2009 and only ten percent of them were accepted. Peru and Argentina also have smaller programs. The Spanish government is also helping South American migrants to return back home, but only 8,975 have applied to any of the three different types of benefits offered between 2009 and 2011.

Return migration policies, to be effective, need to take into account several factors, such as: the high economic and social costs of moving back; the time to get used to a new residence, find a job and settle; legal barriers; acquired ties with the host country; and the lost financial stream from remittances sent to their families.

The main propeller of change in migration patterns is happening within South America itself, and its dynamics will have a growing visibility in regional integration policies during the next 10 years. Chile and Brazil are currently in the process of reviewing their migration policy. The agreements in the Andean Community of Nations (CAN) and MERCOSUR promote openness and reduction of legal barriers to work and live in member countries. MERCOSUR has been particularly active in encouraging intra-regional migration with their policy to allow free movement of production factors between member countries. Moreover, almost every country in the region has launched regularization programs for migrants without residence visas, which will also contribute to obtain more complete data of migration patterns within the region.

Some countries are marketing themselves as attractive spots for people outside the region. The Ecuadorian Dream, as advertised in the Ministry of Foreign Affairs website, is trying to facilitate migration from other countries, with a particular focus on Europeans. Europeans are increasingly choosing to live in Argentina, Brazil and Venezuela, especially young Spaniards and Portuguese seeking new opportunities to the growing unemployment in their countries and taking advantage of the common language.

There are some challenges and ideas that could allow countries in the region to adapt to these emerging migration patterns in the next ten years. First, current return migration policies favor only a small population group and need to become more comprehensive to guarantee equal opportunities to all expats. Second, better laws should be flexible to foresee changing migration patterns such as seasonal migration. Third, better policies need better statistics. Fourth, migration and integration policies should mitigate discrimination and unequal opportunities. Finally, since Brazil and Argentina have been the main receptors of regional migrants, these countries could take the lead in discussing and designing migration policies, preferably linked to regional integration policies. MERCOSUR has made a lot of progress in this regard and there are great opportunities to replicate these policies throughout the region.