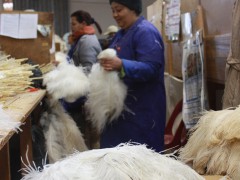 This article was originally drafted by Stef Terblanche and the South Africa Node of the Millennium Project, excerpting from http://www.leadershiponline.co.za/articles/labour-brokers as part of the Rockefeller Foundation’s Searchlight Process. For more Searchlight content on futurechallenges.org, please click here.

As the debate on the role of labour brokers [in South Africa] rages on, a new study by a respected independent policy research and advocacy organisation has found that temporary employment services play a big and positive role in helping unskilled and inexperienced young people find jobs. The study was conducted by the Centre for Development and Enterprise (CDE) and is entitled “Routes into formal employment – Public and private assistance to young job seekers”. Workers at an ostrich feather factory in Oudtshoorn. (Photo by South African Tourism from flickr.com CC BY 2.0)

Those under the age of 25 –1.4 million young people– account for 30% of all unemployed. If those aged 25-29 are added, the figure rises to 2.5 million unemployed young South Africans. The CDE commissioned the research to identify the most common “routes to employment” and provide some analysis of how effectively these routes work. Included in the Routes study were the informal sector, the Expanded Public Works Programme (EPWP), the National Youth Development Agency’s (NYDA) Jobs and Opportunity Seekers (JOBS) programme run through the learnerships offered by Sector Education and Training Authorities (Setas), and temporary employment services (TES) firms, commonly known as labour brokers. The Routes study found that:

The majority of employed people in all cases found their work without the help of employment agencies. Yet the study concludes that, although relatively small in overall terms, the number of those who found work through an agency was “still signiﬁcant in terms of the numbers of people nationally who use this route to employment”. In 2009, for example, the Confederation of Associations in the Private Employment Sector claimed that TES ﬁrms placed over 500,000 job seekers in employment every year. But “more recent estimates suggest the number of placements per year is closer to one million,” the report states.

And while people placed by TES firms such as Adcorp worked for periods shorter than is typical of the economy as a whole, there was no evidence that they are paid lower wages, as claimed by Cosatu and others. TES-placed workers earned median wages of R2 934 (US$350), a ﬁgure that is close to the median of R3,000 in the Quarterly Labour Force Survey. The research also found that some employers – especially large, capital intensive ﬁrms which employ some low and important skilled workers – rely more heavily on TES ﬁrms than others, TES services appear to help companies grow and compete globally and much of the reliance on TES ﬁrms reﬂects seasonality in demand for labour and broader international trends towards more ﬂexible (and temporary) forms of work. The research found that labour brokers were most useful to young, inexperienced workers and those whose link to the labour market was particularly tenuous. These services “may help bring excluded households and workers into the economy” making the economy more inclusive. This, they say, must be factored into the policy debate.

The full study as well as a separate executive summary can be downloaded from here http://www.cde.org.za/article.php?a_id=427, and see here http://dailymaverick.co.za/article/2012-03-15-labour-broking-a-new-player-enters-the-ring for a good background article around the politics of labour broking in South Africa. In a nutshell, Cosatu, the labour union which is in a governing alliance with the ANC wants labour brokers (TES firms) banned – temporary workers cannot become union supporters – whereas business interests, job seekers and the economy as a whole are supportive of TES firms.