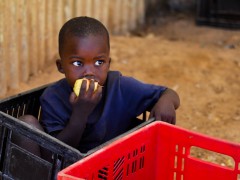 This article was originally drafted by the South Africa Node of the Millennium Project as part of the Rockefeller Foundation’s Searchlight Process. For more Searchlight content on futurechallenges.org, please click here.

Where a South African child is born and lives remains the single largest factor in determining access, or otherwise, to basic opportunities such as education, healthcare, water, sanitation, electricity and early childhood development programmes, a new World Bank report shows. The finding emerged though the application of the bank’s Human Opportunity Index (HOI) methodology, which uses public domain statistics to measure inequality of opportunity in a society. Poverty reduction and economic management network lead economist Ambar Narayan, who presented the findings in Johannesburg on 24 July as part of the release of the bank’s biannual ‘South Africa Economic Update’, said the prevailing disparities in opportunity between a child living in a suburb as opposed to those in an urban township, or a rural village, were “huge”.

The second most important factor in the prevailing inequalities of opportunity related to the education of the head of the household, which typically determined the level of access to quality education and health insurance.

The report found that racial factors remained dominant, but that these diminished “once you take into account all the other circumstances”, such as parental education, location and the composition of a household. Nevertheless, the disparity among race groups in South Africa remained large.

The HOI analysis also showed that, while the coverage rate in the provision of services was important to encouraging more equality of opportunity, high coverage rates could also conceal variation in the quality of such services.

For instance, South Africa had near universal coverage in primary education, with school attendance being close to 100% and among the best among comparator countries.

However, the poor quality of education could be seen in the fact that only around 50% of those learners completed their primary schooling on time, which was similar to rates achieved in far poorer countries such as Nicaragua, El Salvador and Honduras. Similarly, in the labour market, inequality of opportunity in employment is high, while the situation was particularly challenging for young workers, as well as residents of townships, informal settlements and rural areas.

“An equitable society would not allow circumstances over which the individual has no control to influence her or his basic opportunities after birth. Whether a person is born a boy or a girl, black or white, in a township or leafy suburb, to an educated and well-off parent or otherwise should not be relevant to reaching his or her full potential,” the report notes.

But it also states that for an unequal society, such as South Africa, there were “no simple, elegant policy solutions in the quest for equity”.