This article was originally drafted by Mekhe Thies and the Centre for Democracy and Development for the newsletter “West Africa Insight” as part of the Rockefeller Foundation’s Searchlight Process. For more Searchlight content on futurechallenges.org, please click here.

The launch ceremony was organized by the GIE Sope Khadim village women, who simultaneously received 140 ovens for cooking at home. Present at the event was the office manager of solar cookers in the Ministry of Scientific Research, Abdoulaye Toure, who explained that his presence signified the government’s willingness to assist women in starting their solar cookers.

This project is funded by the Small Grants Programme (SGP) with technical collaboration of the United Nations Program for Development (UNDP). The mobile solar bakery reaches 500°C and can produce 70 loaves in the morning and 100 in the evening,” said Abdoulaye Toure. This project has operated since 1982, he added. “With American cooperation, the project was updated and we’ve created a solar bakery,” said Toure, who is also the designer of the technology. He added: “It can be moved around because we have found people moving them around to serve customers during weekly markets in their localities. The oven can serve these people too.” 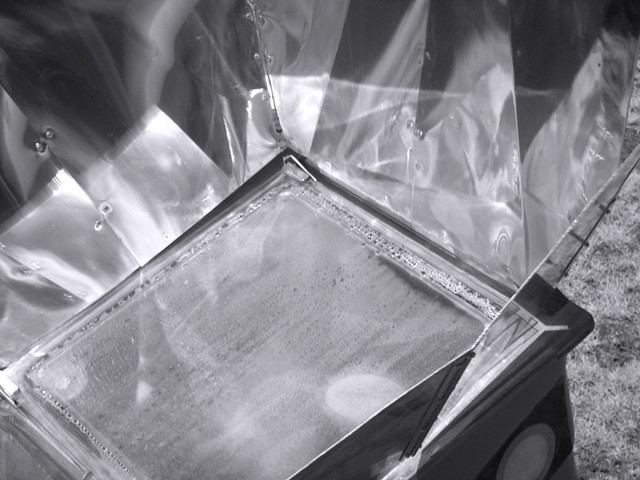 A solar cooker similar to the one used in West Africa (By A. Subset from flickr.com CC BY-NC-ND 2.0)

The solar cooker is a box that converts sunlight into heat and can raise the temperature to 180 degrees, which is enough to cook any dish. Noting that Burkina Faso is the country with the largest number of solar cookers in the world, the designer however noted that the Senegalese were slow to adopt this oven in the 1990s. But, with perseverance, he said, “we returned to again offer this tool to help in household domestic work”. The officer in charge of cookers at the Ministry of Scientific Research highlighted environmental impact of this development, especially how it contributes to the preservation of natural resources. Abdoulaye Toure advised that just accompanying this technology with a little reforestation program will revive the ecosystem.

According Abdoulaye Toure, he has been combining the use of this solar oven with cooking gas alternately. Thus, he said, the bakery can operate continuously. “This is the fourth project funded by the GEF in the area. Ndoukoura is a community where the solar oven is a tool specially crafted for cooking,” said Toure.

“The search for firewood is a headache for the village,” lamented the scientist. Women spend 10 000 CFA francs or more per month to buy firewood. “The oven cannot solve everything but it certainly can solve problems in energy, almost 70%”.  This is a local initiative that can transform traditional technology if supported and not allowed to die.