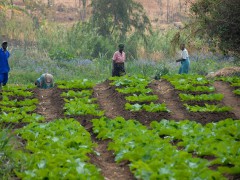 This article was originally drafted by Terfa Hemen and the Centre for Democracy and Development for the newsletter “West Africa Insight” as part of the Rockefeller Foundation’s Searchlight Process. For more Searchlight content on futurechallenges.org, please click here.

Dearth of skills and the capacity to apply techniques in modern agriculture is among the factors impeding the development of agriculture in West Africa of today. Region wide there is a noticeable dependence old techniques that are unable to produce and preserve agricultural products to adequately take care of an ever surging population. This has become more worrisome recently with projected population figures and the glaring lack in advancements technology across the region. As part of initiatives to provide a way out of the situation, attention has been drawn towards capacity enhancement for stakeholders in organic agriculture. The quest to put this into practice is currently enhanced in Nigeria by the Organic Agriculture Project in Tertiary Institutions in Nigeria (OAPTIN) which was founded in 2004 in response to the global quest for the development of a sustainable agriculture production system. Its focus is on capacity building, skill and technology in organic agriculture in West Africa.1

Through this initiative, the University of Agriculture, Abeokuta, Ogun State, Nigeria and the Coventry University Centre for Agroecology  and Food Security (CAFS) from the 3rd -12th of July 2012 organised the second summer school programme in organic agriculture. Prominent among participants at the event was the Director of CAFS, Dr. Phil Harris. The summer school targeted Nigerian scientists, farmers and business professionals. It provided basic knowledge on the principles and practices of organic agriculture, hands-on experience in organic crop, livestock and fish production, and strategies and skills in the marketing of organic produce. The work of the CAFS is currently spread across universities across West Africa with the aim of developing organic agriculture in West Africa by embedding organic agriculture in the curriculum of the region’s universities.

CAFS is currently working with universities in Ghana, Benin, and Sierra Leone to develop the full potential of organic agriculture in West Africa. “This will help to embed organic agriculture into the curriculum in West African universities,” Professor Harris explained. “Graduates will benefit by participating in the global organic sector, by helping to develop locally appropriate standards and technologies – and in the production and marketing of West African organic products. The beneficiaries will be the farmers whose livelihoods will ultimately improve thanks to the reduction of production costs, and increase in agricultural yields.” There is a not a doubt that agricultural production in Nigeria and West Africa in general faces a lot challenges, as population continues to surge in the midst dearth of finance instigated by a gloomy world financial outlook. Lack of interest by the teeming youth population in West Africa most due to unmechanised practices in agriculture, continuing insecurity and government policies that have not been able to adequately provide solutions, all make initiatives like the summer school welcome and have the potential to impart skills that will come in handy in the future.

The summer school, even in other areas of food production, provide a way out in feeding future populations if the capacity built is efficiently utilized and sustained. There is a need for stakeholders involved to critically analyse the potential benefits of such initiatives, and a need for sustenance and continuity in convening of such programmes. The rural areas of the region where most of the farming takes place need wide distribution of the knowledge gained too. Both government and private sector driven initiatives in the use of such knowledge have the potential of changing the face of agriculture as the future beckons.