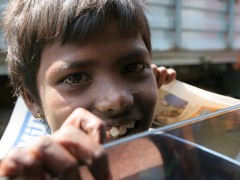 This article was originally drafted by Lina Sonne and the Strategic Foresight Group for the newsletter “Asian Insider” as part of the Rockefeller Foundation’s Searchlight Process. For more Searchlight content on futurechallenges.org, please click here.

Nobody wants to read about poverty, popular Indian news media seems to cry. By going by Mumbai’s morning papers, the main focus much of the time is on the latest Bollywood news, corrupt officials or congested traffic – subject matter that appeals to a middle class readership. However, much less is about the daily travails of the urban poor across India. In Mumbai, for example, there were grievances against the media last year because of its lack of coverage of ongoing slum evictions and demolitions. When the media did cover slum demolition, it was from the point-of-view of residents of nearby apartment blocks that were disappointed in the temporary halt to demolitions due to civil protests. Poverty, and news concerned with the poor and the issues they face, simply does not sell. Children in a Bangalore slum. (By Soul Flow, from flickr.com, CC BY-NC-ND 2.0)

The mainstream media’s focus on the interests of the middle classes holds true for Bangalore, India’s IT capital, as well. One news outfit that is trying to redress this balance with the monthly magazine Slum Jagatthu. Written in Kannada — the local language of Karnataka state — Slum Jagatthu, meaning “Slum World” in English, was started in 2000. Along with 10 of his previous co-workers, Issac Arul Selva launched the magazine. Selva had previously been a staff reporter for Slum Suddi (“Slum Information”), a magazine started by Bangalore NGO Jana Sahayog. However, when it closed down in 2000, Selva decided to start Slum Jagatthu and continue writing on issues that matter to residents of slums across Karnataka. Its unique focus on slum-dwellers has enabled the magazine to bring up many important issues in slums.

The magazine’s reporters live and work in slums and so are intimately familiar with issues affecting the urban poor. Written by slum-dwellers for slum-dwellers, the magazine provides local stories of slums from across Karnataka. The stories can be both uplifting, such as a woman earning INR40 (~US$0.70) per day by selling cigarettes and is still able to feed not only her family, but several street children. Aside from inspiring human interest stories, the magazine also does informative reports, such as telling local residents about government schemes they can access and rights they have, and even suggesting what local communities should be demanding from local politicians coming to canvass for votes prior to elections.

Slum Jagatthu costs INR5 (~US$0.10) per issue, a sum low enough to permit its target audience to purchase it, and the circulation of about 2,000 copies per month reaches slum residents across Karnataka, as well as researchers, government officials and politicians, who want to be better briefed on the current talking points and big issues of slums. When it comes to slum dynamics, politicians believe solutions should be focused on slum clearance rather than slum upgrading or slum development. Being unimpressed with this lack of foresight, the editorial board of Slum Jagatthu has decided not to print advertisements from the government. Instead, the magazine does its own advocacy, based on the visions of Ambedkar, and the magazine’s reporters hope to contribute to local empowerment and awareness among slum residents. Already, Selva is seeing a change towards more engaged slum communities and activism among poor youth.

Slum Jagatthu has part-time roving reporters who always have an ear close to the ground, learning about what is happening in slums across Bangalore. An interesting and encouraging lesson the magazine’s reports have realized is that urban poor youth are interested in writing stories that matter to them. To support and promote this interest, Slum Jagatthu hosts journalist training courses. During four days, up to 40 young writers from Bangalore’s slums are given training on how to be a reporter. Selva claims that several graduates of the short course have already found jobs in mainstream media.

Slum Jagatthu, however, will remain resolutely out of the mainstream, beyond articles by Selva translated into English and published in the Indian magazine Tehelka.

Local Media as a Voice of Empowerment and Change

As the mainstream media focuses on national and international news, sports and glamor, initiatives such as Slum Jaggathu provides a welcome voice on issues that really matter to the urban poor. Its potential in other cities across South Asia is large considering the magazine in Bangalore not only provides news about issues that matter to local slum residents, but also provides information that the residents may otherwise not have access to. It uses information and provides advice to empower residents. The magazine, of course, also offers, at the least, part-time job to its reporters. The magazine’s reporters, then, are able to train on the job and get hands-on experience that they can leverage to, for example, pursue a career in journalism with other publications.

While development has seen radio programs as a way to empower local rural communities, perhaps a local newspaper would work better in an urban setting where people are more literate. However, not all initiatives are successful as the Slum Suddi, the precursor to Slum Jagatthu. The crux, however, seems to be to have local residents fully in the driving seat. Perhaps one way is to get young people from slums involved in newspapers or newsletters during their schooling through local programs that nurture their writing skills at the same time as increasing their community awareness, sense of empowerment and activism. If people from slum communities themselves tell the stories of their communities, and why those stories matter, they are likely to be a lot less biased than what is currently the case with reporters from mainstream media providing commentary. Lastly, young reporters writing about the trials and tribulations of the local communities, not only become good writers and ‘voices’ of the local communities, but may shape up to become important local leaders of the future, with real voices and the power to affect change for the better.