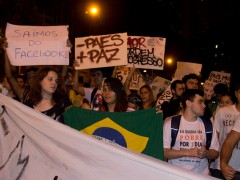 This article was originally drafted by Rob Jamieson and Indochina Research for the newsletter “I-Light” as part of the Rockefeller Foundation’s Searchlight Process. For more Searchlight content on futurechallenges.org, please click here.

In the past three years, up to 25,000 young Cambodian women have migrated to Malaysia in pursuit of better paid employment as domestic workers. The promotion of work abroad through private and public employment services has been a cornerstone of policies aimed at alleviating unemployment. However, Natalie Drolet from Legal Support for Children and Women (LSCW) explains that under Malaysian law, “domestic workers are not entitled to the protections afforded to other workers, like the right to one rest day in a week, an eight hour work day, public holidays, annual leave, sick leave and maternity leave.” Defined as “domestic servants” and therefore not covered by the country’s Employment Act, their work conditions are left to the discretion of the employer and, as a result, all too often maids are at risk of over-work, physical abuse, under-payment and the burden of inflated ‘handling’ fees and debts. As migrants are forced to turn over their passports to employers, undocumented women and girls who flee abusive employers are at risk of being treated as immigration offenders. Currently, Malaysian employers pay as much as $US3,000 in agency fees to obtain a maid, plus a number of other charges to the government, such as medical check-ups, according to a report in the Malaysian Star newspaper. Meanwhile, the maids themselves pay six months of their future salary to agencies in Cambodia and a further six months to the agency in Malaysia in commission, which amounts to seventy percent of the salary in upfront costs of what the maid could expect to earn over a two year contract. Moreover, maid agencies often have licenses obtained by a system of connections and patronage with links to the immigration authorities in both countries.

In 2011, the International Labor Organisation (ILO) adopted a historic set of international standards to improve the working conditions of tens of millions of domestic workers worldwide. Yet despite being signatories to the ILO, neither the Cambodian nor Malaysian governments have yet endorsed the accord. Moreover, most prospective migrant workers here in Cambodia are simply unaware of the practical, legal, social, and economic consequences of migration to other countries. At this time the government of Cambodia has placed a temporary ban on its citizens working in Malaysia due to several high profile cases of abuse.

Perspectives from the Field

In order to get a deeper understanding of Cambodians’ attitudes towards emigration we conducted a series of in depth interviews with twenty-four. Two questionnaires were made, and the first was given to those who were planning on leaving Cambodia to work abroad. These people were contacted at the passport office in Phnom Penh. The other questionnaire was given to those who had lived abroad before.

Thailand was viewed as the most popular destination country, though in the sample an equal number planned to go to Korea as Thailand. Reasons expressed included: Earn more money (6 respondents), a lot of jobs (6), easy to go (3), variety of jobs, good food, better living conditions, cheap, good labor laws (1). Thailand was also deemed the easiest country to live in for the following reasons: Don’t need to learn Thai (8), No test (5), easy to find a company to bring you (3), good labor laws (1), close to Cambodia (2), No Health Check (2).

Of those preparing to go to Thailand all had heard of Cambodians experiencing hardships, these included; Being sold or trafficked (3), not receiving salary (3), Killed while working (1), intimidation by criminals (1), Bad living conditions (2), no protection from Thai government (1). Only one respondent had heard of difficulties for a Cambodian working in Korea.

Some of these bad experiences were confirmed by the responses of returned migrants: 4 out of 5 who went to Thailand would not recommend going to a friend or family member. Unmet expectations included earning less than hoped and poorer working conditions than advertised. Choun Dara, a former migrant to Thailand provides his perspective: “We used to work all day, from before the sun was out and after it was down in the evening. The Thai workers came at the same hours but our jobs were more difficult and dangerous…For me it was not so bad because the company paid me what they promised and I could earn more money than in Cambodia, which I sent to my daughter and wife to support. Some people I knew from my hometown went to Thailand with no paper and had to work harder than me for almost no money.”