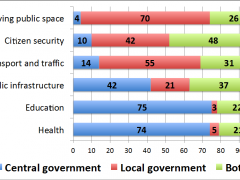 FIGURE 1. Who has the main responsibility in each area: the central government, the local government, or both?
Source: GFK, Survey about Lima’s government performance.

A recent survey of Lima’s local government performance shows that people in the city thinks that improving public space should be a key priority, and one with a clear mandate for local governments.

Lima follows a common trend in other South American cities: creating and designing public spaces that are inclusive, serve as one-stop shops for government services, connect marginalized areas of the city and strengthen social capital. Extending green areas, improving plazas and historic centers, building theatres, museums and cultural centers, creating pedestrian-only areas, and building infrastructure to promote tourism to the city, are examples of such projects in the region.

“Favela Bairro” is a grand-scale project that started in 1994 with the purpose of providing a set of public services in the favelas of Rio de Janeiro. With the support of the Inter-American Development Bank (IADB), 250,000 people living in 60 favelas now have public spaces that connect them with other parts of the city and function as centers where people connects and obtain diverse services from the local government such as daycare centers, public libraries, basic education facilities and health posts. An IADB evaluation found that the second phase of the program (1996-2006), was able to improve the livelihoods of people in favelas: incomes rose by 15 percent compared to household’s where the program did not operate; public services improved such as an increment of legal connections to public sanitation network; prices of properties with formal title increased by 40 percent and self-assessment of property price for tax purposes increased by 70 percent; and other impacts over health and education indicators.

“Morar Carioca” is taking “Favela Bairro” to a next step. This US$4 billion program started in 2010 and aims at urbanizing some 250 of Rio’s favelas by 2020 as part of the legacy of the 2016 Olympics. This means not only providing infrastructure and social services, but also including favelas in a comprehensive planning of the city. Each favela will have Postos de Orientação Urbanística e Social (POUSOs), which will guide their inhabitants to organize themselves to increase the value of the neighborhood, harmonize regulation for construction, and, in practice, function as decentralized branches of local governments at the neighborhood level. These offices will also facilitate the coordination of social programs, because POUSOs will also articulate interventions that other government programs already direct to vulnerable population. Such a large program also includes mitigation measures in case of forced evictions and social conflicts, as well as a security component in coordination with the police and the military. “Morar Carioca” includes an impact evaluation study to assess the benefits in people’s livelihoods. In August 2012, Ordenanza 1625 from the Municipality of Lima created “Barrio Mio” with similar profile to that of Rio’s programs: a big investment in a short period of time, to renew, rehabilitate and provide high-quality infrastructure to 19 vulnerable areas of the city where 1.3 million people live. Politicians frequently use leaders from these informal settlements for political mobilization. By developing infrastructure in public spaces, Barrio Mio seeks to transform these settlements, provide public services and work with the organized community to maintain these public spaces.

Nine of ten people will live in urban areas of the South American region by 2050. The examples of Lima and Rio show how cities are investing in improving life quality of their citizens at a large scale. The main driver of these investments is the capacity of cities to mobilize public and private resources. Lima is preparing a US$500 million bond in the first semester of 2013 to finance rehabilitation programs such as Barrio Mio and other cities will continue issuing bonds or structuring private-public partnerships.

The reason that such large programs are needed nowadays is that most cities could not manage well the process of urbanization during the last decades. This process is replicating in interior cities of the region: it is time for local governments to improve their planning capacities to manage their cities’ economic and social growth. Otherwise, for each successful and well-thought large-scale infrastructure program, we may end up with poorly-managed investment programs that create more problems than solutions.