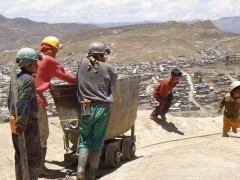 This article was originally drafted by Fernando Prada and the FORO Nacional Internacional for  the newsletter “Agenda Suramerica” as part of the Rockefeller Foundation’s Searchlight Process. For more Searchlight content on futurechallenges.org, please click here.

A recent survey of National Development Banks (NDBs) —state-owned financial institutions set out to foster economic development and social development as part of their operations— has calculated that they still manage a quarter of total bank assets in the world. Helping to ease the credit crunch after the financial crisis put these institutions back in the spotlight: between 2007 and 2009, 88 percent of NDBs increased lending and half did by more than 50 percent. This describes well their countercyclical role, but NDBs’ long-term development role is always subject to intense debate. The Brazilian Development Bank (BNDES) describes well two trends that other NDBs in the region will face in the next ten years.

First, the surge in 2008 only reinforced a trend of growing operations during the last decade. BNDES regained a key role in financing public and private investment with the Lula administration, in contrast with a downscaling during the 1980s (partly explained by the application of macroeconomic reforms).[1] This year, it has escalated operations to cope with the economy slowdown. In other countries, credit from NDBs has increased at a slower pace focusing on sectors partially unattended by private banks.

Second, as NDBs increase their operations, their role in a market economy falls under public scrutiny. Governments are not keen on promoting an open debate about the rationality of these interventions, but they should in order to avoid mission creep, crowding out private investment and misuse of financial resources.[2] BNDES celebrated its 60th anniversary in September 2012 in the middle of criticisms about its overreaching scope. According to the Financial Times, this is a “bank too big to be beautiful”.[3] It currently represents 21 percent of total domestic credit, and a great share goes to large companies (above 70 percent in some estimates) instead of SMEs. BNDES financing an expansion of Brazilian multinationals abroad gets a lot of criticism, as does the Peruvian Bank of the Nation’s announcement to provide a quarter million credit cards to public employees in 2013 in an already booming domestic credit market, or the Peruvian AgroBanco providing credit directly to small farmers.

Politicians and citizens find a countercyclical role for NDBs more tolerable rather than a development role. NDBs operations could also create distortions in credit markets, crowd out private investment or allocate resources without an adequate risk assessment —including cases of populism, mismanagement or corruption.

Multilateral development banks (MDBs) are already working with NDBs to promote credit access and financial inclusion. In Colombia, Chile, Brazil and Peru they collaborate on a regular basis. Partnering with MDBs has contributed to legitimize NDBs programs, as well as to provide an opportunity to introduce reforms, professionalize management, promote transparency and replicate good practices.

Bilateral cooperation agencies and foundations could join MDBs and selectively choose a group of NDBs to work with. Most of these banks are well managed and have a clear development mandate. In countries with weaker macroeconomic and institutional conditions, “dormant” NDBs that activate in case of credit constraints are recommended.

The recent experience of NDBs has been more positive than in previous decades, but their operations are still subject to controversy. Nevertheless, there are positive trends regarding these institutions that other international cooperation donors can help accelerate: better management, emphasis on mobilizing private resources, and a focus on supporting people through financial institutions rather than directly.