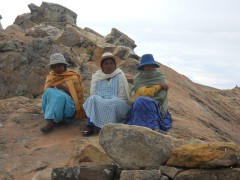 This article was originally drafted by Gonzalo Alcalde and Pasko Kisic and the FORO Nacional Internacional for  the newsletter “Agenda Suramerica” as part of the Rockefeller Foundation’s Searchlight Process. For more Searchlight content on futurechallenges.org, please click here.

Social conflicts related to natural resources, both violent and non-violent, are on the rise in Andean nations like Bolivia and Peru (see figure 1), sometimes even crossing international borders. Rural villagers in Bolivia (Photo by Psyberartist from flickr.com, CC BY 2.0)

At first glance, democratic governance in both countries seems to face similar challenges related to social conflicts. Both economies have grown during the last decade boosted by favorable prices of their main mineral exports. At the same time, the boom period has not translated into lower inequality and exclusion or improved state capacities to respond to citizen’s rising expectations. Peru and Bolivia share a long history of negative social and environmental impacts of extractive activities in poor, rural areas.

A closer look at conflicts in both countries also reveals diverging trends. Different patterns of interactions between state, civil society and the private sector pose different governance challenges in the face of growing social conflicts. Three factors are especially influential on the configuration of current social conflicts: the economic role of the state; the shape and depth of decentralization; and the strength and capacities of social movements.

Economic role of the state: In Peru, state companies’ operations in the extractive sectors have been marginal after the implementation of market reforms in the early 1990s. In contrast, Bolivia’s state companies and nationalization play a greater role. As recent conflicts illustrate, Peru’s central government often postpones its participation in key conflicts and waits for negotiations between private companies and civil society organizations, often in alliance with weak local and regional authorities. In Bolivia, in contrast, national government usually gets involved in many of these conflicts from the outset, particularly after Evo Morales’ administration nationalized several mines.

Decentralization: In both countries, decentralization has empowered subnational actors and given them control over larger budgets. The decentralization process that began in Bolivia in the 1990s reformed municipalities, and transformed local grassroots organizations into Territorial Base Organizations (OTBs in Spanish), which in effect formalized a variety of local level groups. Policies to promote organizations’ autonomy and participation in local affairs have provided them with the legal instruments and contacts to sustain large protests. In Peru, the formal decentralization process started in 2002. Today, regional and local governments get a greater share of the public budget, but they are still relatively weak political actors.

Social movements at the national level: Civil society organizations (CSOs), particularly of indigenous groups, are weaker institutions in Peru compared to Bolivia. In Bolivia, there are strong, experienced, and highly organized social movements with the capacity to articulate their actions at the national level. In contrast, Peru has weak institutionalized movements without capacity to coordinate actions at a national scale. When there are numerous, disorganized, and often opportunistic, rent-seeking organizations around a conflict, it becomes incredibly difficult to reach agreements and negotiate in a context of potential strife. Bolivian miners. (Photo by Jenny Mealing from flickr.com CC BY 2.0)

In both countries, there is a need for strengthening capacities for dialogue, conflict prevention, and negotiation. Moreover, there is a broader challenge of changing the “culture of violence”.

Alternative scenarios: Considering the governance challenges outlined above, three possible scenarios emerge for Peru and Bolivia in social conflict mitigation and management over the next 10-15 years: