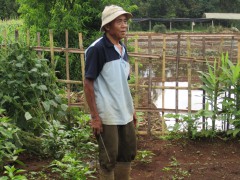 Thailand has introduced ‘tree bank’, a new financial model, to help poor farmers repay their loans. The success of the concept could reduce rural indebtedness and increase the income of farmers with small landholdings in the coming years. A farmer in northern Thailand (Photo by Stephen Bugno from flickr.com, CC BY-NC-ND 2.0)

The concept of tree bank was introduced as part of the ‘Grow trees to clear debt’ project of the government of Thailand in 2006. In 2009, the Bank for Agriculture and Agricultural Cooperatives (BAAC) formally launched the Tree Bank Project as a corporate social responsibility (CSR) initiative. The government allocated USD 1 billion towards its development. In 2011, 984 tree bank branches were opened across 33 provinces of Thailand. Tree bank maintains a database of tree species, volume of carbon release and valuation of the trees. Tree banking is a scheme offered to farmers where the monetary value of trees can be used as a type of capital. The farmers can avail two types of financial services from tree banks:

The minimum requirement for availing the loans and other financial services from the tree bank are as follows: a farmer needs to plant at least 40 trees on 1 rai (0.4 acres) of land. The maximum number of trees for which the financial services can be availed is 1000, as the main purpose of the scheme is economic upliftment of farmers with small landholdings. During the first ten years, the registered trees cannot be sold and are valued on the basis of cost incurred in planting them (for loan and deposit purposes). After ten years, the valuation is done on the basis of the market value of trees. The scheme lays emphasis on growing indigenous species of trees. A forest in Thailand (Photo by David Wiley from flickr.com, CC BY 2.0)

Apart from helping the government in its reforestation efforts, tree bank, in the long run, could increase the income of poor farmers who cannot afford to grow more than one crop (mono-cropping). The average formal and informal debt of any farming household is more than 50% of their annual income, according to Thailand’s National Statistics Office. The tree bank gives an opportunity for farmers with small landholdings as well as those with mortgaged farmland to get loans from the formal sector. This, in the future, could reduce their dependency on high interest rate loans from the informal sector. In the next few years, BAAC plans to sell carbon credits from the trees registered with the tree bank and give the amount earned to these small farmers, thereby increasing their income. However, lack of awareness of the functioning of the bank amongst less educated and uneducated farmers could hinder the growth of this scheme. Also, the scheme excludes farmers with landholdings smaller than 0.4 acres. Foundation can partner with implementation bodies to educate and train the rural farmers to avail services from tree banks.