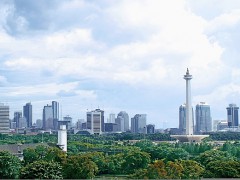 This article was originally drafted by the Lee Kuan Yew School of Public Policy for Issue 15 of the newsletter “Asian Trends Monitoring Bulletin” as part of the Rockefeller Foundation’s Searchlight Process. For more Searchlight content on futurechallenges.org, please click here.

ASEAN’s capital cities are growing very quickly. For example, Jakarta’s population will soon exceed ten million inhabitants and is still growing by more than 120,000 per year.7 Metro Manila has already reached 11.5 million, but still grows rapidly at about 2% per year. As thousands of rural poor relocate to urban areas each year with the hope of finding better work opportunities, the same trend can be found across ASEAN.

This trend in urban growth has several consequences for water provision. The main positive consequence of urbanization and densely populated urban areas is that governments can provide water for more people using smaller infrastructure investments. As people leave their remote villages and start to live in apartment buildings or densely packed urban settlements, it becomes easier for governments to provide piped water connections. The cost of extending the water grid to remote rural areas is very significant, and remains one of the main barriers to providing piped access to water in these regions. Here, water authorities could embrace the trend of urbanization as a way to exploit the economies of scale in water infrastructure investments.

However, these benefits may not apply to Southeast Asian cities, where the internal migrants are mostly poor. As the poor move closer to urban centers, they face several challenges such as increased cost of living and scarcity of housing. Thus, they often settle in slums or temporary settlements in the urban periphery, areas where the piped connections are unlikely to be constructed.

The consequences of slum creation for water provision are dire. For example, informal settlements in Jakarta are mostly clustered on land where it is illegal to build homes, such as rainwater catchment areas and river banks. In these circumstances, the illegal settlements cause direct harm to the city’s water supply, both by hampering groundwater replenishment, because they damage the water catchment areas, and by polluting rivers with their household wastes.

A boy bathes in the polluted river under a railroad bridge, North Jakarta Slums Indonesia. (By Jonathan McIntosh (Own work) [CC-BY-SA-3.0 (http://creativecommons.org/licenses/by-sa/3.0) or GFDL (http://www.gnu.org/copyleft/fdl.html)], via Wikimedia Commons) Even when slums do not form in areas that jeopardize the water supply, slum-dwellers still face legal barriers such as lack of legal tenure over their housing. This causes a problem in providing piped connections to these houses. In Jakarta, a law prohibits the extension of utilities services to households without property titles for fear that the services would “legalize” the settlement. Other cities struggle with the same problems, with informal settlements popping up on unused plots of land.

Facing this rapid flow of urban poor, governments have difficult decisions to make. There is the option to concede full legal rights to illegal settlers, enabling water companies to legally provide the settlements with piped water connections. The main strength of this solution is that it is quick and conflict-free. Slum-dwellers will likely favor the solution because they are not forced to relocate and will receive the services that they require. However, this solution comes with several issues. The concession of full rights over this land essentially rewards people for squatting. This will induce more people to settle illegally, inviting larger waves of migrants who come with the intention of settling illegally. This, in turn, exacerbates the pressures on all of the city’s essential services, not just water.

There is also the option of clearing the illegal settlements and providing alternative housing at a low cost. This gives the poor a legal means of accommodation and a legal means to access piped water and other utilities. However, this also comes with its own set of problems. This option is expensive for governments due to the cost of new public housing projects. Additionally, the magnitude of urbanization makes it virtually impossible to provide enough of these housing units. The inevitable limits of supply will force many poor people to be stuck in their make-shift settlements without proper access to water.

Finally, aside from the problems from illegal settlements, there are also problems caused by the absolute number of migrants. Rapidly growing urban populations will put a strain on the available water resources. Although pipelines can be built and households can be connected to formal water services, the available amount of water is a different story. Several cities are barely able to keep up with the rapidly rising demand for water. In these kinds of situations, the slightest blip in supply could leave thousands of people without enough water. To take another example from Jakarta, a burst pipeline in September 2011 left nearly half of the city without water for almost 48 hours. Thus, it is clear that governments need to act quickly to address the issue of adequate supply in face of high volumes of city-bound internal migrants in the future.