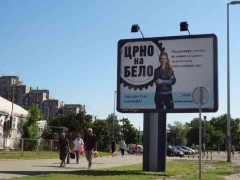 The Serbian labor market is beset by huge problems. They include violations of workers’ rights in many forms, but one particularly entrenched problem is gender-based discrimination in the labor market and at the workplace. According to recent research by the Victimology Society of Serbia, 72,2% of women have experienced gender-based discrimination at some point in their lives. At the formal level things seem satisfactory: the Constitution of the Republic of Serbia guarantees equality and prohibits discrimination based on personal attributes. Yet even though the Gender Equality Law and the Law on the Prohibition of Discrimination were passed in 2009, enforcement of these laws remains weak. Furthermore, the work of authorized state institutions in this field, including the Commissioner for Protection of Equality and the Directorate for Gender Equality, is largely unknown to the broader public.

Workplace discrimination is manifest in terms of hiring, salary and benefits, promotion, access to professional development, termination. It is based on gender, age, race, and ethnicity and so it is likely that there are cases of “multiple discrimination” – the situation where an individual suffers from discrimination for more than one reason.

“I applied for a janitor’s job. When I came to the interview, the lady told me that she was not interested in hiring Roma woman because she’d had bad experience with Roma people who turned out to be lazy…” was one of the testimonials I heard in the course of the Decent work for all – In black and white project which I’ve been coordinating over the last 14 months. The goal was to promote the Decent Work Agenda adopted by the ILO in 1999 and to raise citizens’ awareness about their labor rights. Through numerous activities we encouraged people both offline (over 15,000) and online (over half a million) to share their stories, be informed and become proactive. Most of them were women, and the discrimination issue was frequently raised. That’s why we started the campaign “Equal at work”, as part of the project.

“At the job interview you don’t have to say if you are married or you’re planning for children” was one of the messages on our billboards in the first phase of the project crnonabelo.com

“After I applied for a business administrator position in one big company, they called me for pre-employment testing. They said that we will need time to fill in the forms. When I saw questions like Who do you live with? Are you married? Do you have any children? Are you in a long-term relationship?  I decided to leave…” said Ana, a 26 year old Master’s  student from Belgrade.

The Commissioner for Protection of Equality pressed charges over one employer whose job ad included the sentence looking for a young female person with a pleasant appearance and at the interview asked questions like the ones Ana was asked. This is not just an isolated case.

Speaking of “pleasant appearance issues”, one girl told me that during  a job interview that she was told she dressed like a lesbian and she would put off customers.

During the campaign in social media one of our Facebook fan page members posted a print screen of the strange ad for PR Manager and PR Assistant she found on one portal. For the job of PR Manager the employer was looking for girls born between 1997 and 1990, and for the PR Assistant girls born between 1997 and 1994. The requirements included sending in two pictures along with the CV. Experience and references were not mentioned. The ad was spread online and through traditional media for two days, before the advertiser removed it. No one (advertiser or employer) was called to account over this, but since then this kind of content hasn’t figured in any job ad.

Age discrimination in job ads is common in Serbia http://www.facebook.com/CrnoNaBelo

In Serbia, women earn 17% less than men. In Serbian households all the work is done by women. Without a balance in household work, sometimes it is almost impossible to talk about equality on the labor market because women have a double burden, and thus it’s hard for them to be competent both at home and in the workplace.  In addition to this, pregnancy and maternity-related problems at work are also frequent.

The first step in solving this issue is strict implementation of existing legislation and penalization of employers who don’t respect the law. Strict implementation of the law will have a major effect and hammer the message home that the law is binding on everybody. However, it’s also important to raise the awareness of Serbian society on this subject. All stakeholders must be involved – organizations of civil society (especially trade unions), the business sector, and the National Employment Office…

Reaching gender equality at work is the continuing challenge even for the most developed coutries in the world. Permanent intersectoral action and synergy among all stakeholders on global, national and local level, as well as developing and sharing the knowledge on the elimination of discrimination in employment and occupation are going to make the long-term effect. It’s a tough job, but we have to do it!