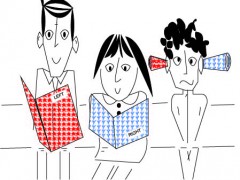 If in America the political battle is waged on the premise of economic policy, with low taxes and free markets on the one side and regulation and progressive taxation on the other, in Slovenia the battle is fought over ideological views of events that happened during and after the Second World War. The problem is not the conflict itself, but the power this conflict has over politics and the electorate to weaken Slovenian democracy. At the beginning of the presidential campaign for the upcoming election on November 11th, one can only hope that Slovenian politicians will start creating visions for the future and stop shaping perceptions of the past.

From 1943 to 1945 Slovenia saw civil war between Slovenian Partisans and the Home Guards. The Partisans fought against the occupying forces of Germany and Italy, whereas the Home Guards fought against the Partisans and communist ideas. In the wake of the Partisan victory, some 10,000 Home Guards were executed without trial. Despite several attempts at national reconciliation since the country’s independence from Yugoslavia in 1991, the public in Slovenia remains divided. And so do the politics. Slovenian right wing parties align with the Home Guards’ standpoint while Slovenian left wing parties support the Partisans’ take on the issue. This has come to be one of the defining differences between the left and right in the Slovenian political spectrum.

Never ending debates over the last twenty years have been particularly taxing on young people who never participated in the historical events politicians bicker about, but are still forced to be part of this war. Should we really be surprised when young people don’t bother to vote because they believe politics is none of their business?

Last year Slovenia decided to mint a two-euro commemorative coin to mark the 100th anniversary of the birth of Franc Rozman–Stane, the general in command of the Slovenian Partisans. The center-right were exasperated over what they saw as the commemoration of a war criminal. This year the new center-right government renamed the Franc Rozman–Stane army barracks and decided not to invite Partisan veterans to the celebration of Statehood Day. These events sparked passionate reactions, occupying the media and public debate for days on end, right in the middle of what is the deepest economic crisis since the country’s independence.

Yet economic policies and reforms change little no matter which side is in power. For example, the proposed reforms of the Slovenian pension system and labor market by the left wing government in spring 2011 were blocked by trade unions and the opposition and failed to gather the necessary support in a subsequent referendum. One year and a half later, with the right wing government in power, the selfsame reforms are still on the table.

It seems like the inability of politicians to fill the political space in Slovenia with a credible vision for the future has led them to exploit electoral sensitivities on the Second World War conflict. This conflict has turned into a tool of political populism. Current presidential candidates might promise to remove the conflict from the campaign, but I very much doubt whether the campaign wheels can turn without it.