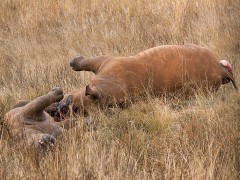 Mother and infant rhino killed for their horns. Photo courtesy of Hein Waschefort.

Over the course of 2012, more than 550 rhino have been brutally and unnecessarily butchered for their horns in South Africa’s national parks, comfortably eclipsing last year’s total of 448. 321 of these deaths were within the supposedly heavily-protected boundaries of the famous Kruger National Park. These numbers are particularly frightening when you consider that there are only an estimated 5,000 black rhino left in the whole of Africa, most of which are in, you guessed it, South Africa.

Not surprisingly, campaigns and agencies looking to stop this scourge have proliferated, just as public feeling towards poachers has grown into an increasingly angry fervour. Farmers have been known to boast of taking the law into their own hands and gunning down poachers they find on their land, while stickers that say things like “Drinking the blood of rhino poachers cures HIV/AIDS” are an increasingly common sight in the back windscreens of cars on the streets of Cape Town.

But are such attitudes in any way productive? As well-meaning as many individuals and groups may be in their quest to save one of Africa’s oldest and most revered beasts, their angry reaction often renders them blind to the social issues and legacies that have helped South Africa become so fertile for poachers in the first place. Like Mary Shelley’s Dr Victor Frankenstein, South Africa must consider the role it has had to play in creating this monster it now finds itself so repulsed by.

At the heart of the problem – as is so often the case in a country still struggling to convincingly cast off the shackles of apartheid – are longstanding geographical, social and economic divides. In fact, even some decades before the institutionalised segregation of apartheid, the former British administration had used a similar method to create many of South Africa’s present day National Parks, a method that would later come to be known as “fortress conservation” or, perhaps more appropriately, “apartheid conservation”.

Put simply, spaces that were generally considered ‘useless’ for anything else, were used for, in theory at least, the containment and protection of South Africa’s wildlife, whatever its former natural habitats and migration patterns may have been. Meanwhile, any indigenous groups and communities who fell within these newly ‘protected’ zones were forcefully removed, and new groups were not allowed to migrate into said areas.

It becomes clear then that not only South Africa’s land but even her wildlife became the possession and property of the colonialists, and both the revenue from this and the enjoyment of it were theirs alone. Even today, many poor rural communities on the outskirts of South Africa’s safari parks still refer to them as “white man’s parks”. Some of these communities stem from those aforementioned groups who had not only their land but their very way of life ripped from them, and have continued to struggle to adapt to the change.

In many of these communities, alcoholism and unemployment are rife. These communities have reaped little if any benefit from the droves of tourists that pour into their former land on expensive safari holidays and they receive little help from the central African National Congress government that is floundering in its attempts to provide basic services like electricity and running water even on the outskirts of South Africa’s major cities, let alone far into the bush.

With all of this in mind then, it should become easier to understand why people from these sorts of communities might be tempted into poaching. Firstly, rhino horn can fetch up to $65,000 a kilo on the black market (more than gold), and the poachers can receive sums of money that sometimes equate to more than ten years of basic salaried work. Although more rangers and new anti-poaching measures are constantly being introduced into parks like Kruger, the potential payoffs are too much to resist for many within the poor local communities, whilst the sheer size of some of these parks and the locals’ intimate knowledge of their geography make the potential deterrent of being caught and convicted relatively inconsequential at times (it has been estimated that more than 90% of poaching cases result in no convictions).

Any future conversation on tackling the scourge of rhino poaching must consider these issues, and look at how the walls of “apartheid conservation” might be gradually dismantled to allow a more integrative and harmonious approach to conservation that benefits and includes all, from the indigenous and rural communities in poaching-affected areas, to the South Africa National Parks organisation, all the way to the central government.

Again though, the main emphasis should remain on the rural communities that have, to date, often been drawn in on the wrong side of the battle. By including them in rather than separating them from the conservation of South African wildlife, they may well begin to feel an increased sense of affiliation towards, ownership of and therefore responsibility for endangered species like the rhino, especially if there were evident economic and social benefits that might come from not poaching.

In this regard, South Africa might look across the border at Namibia for inspiration, where a government program helps ensure that rural and indigenous communities have a vested interest in protecting rather than poaching rhinos in their region. These local communities are given the power to license both hunting and tourism enterprise to private companies who must agree to pump revenue back into those very same communities. Most lodges either have to pay a bed levy or must employ 50% of their staff from the local community.

In fact, even within South Africa there have been somewhat similar initiatives to return tracts of land within national park boundaries to indigenous communities who had previously been forcefully removed, and to help these communities to benefit both economically and socially from these initiatives. The Kgalagadi Transfronier Park is a good example. In 2002, a settlement was reached with South African National Parks that saw 50,000 hectares of the park’s land returned to the indigenous Khomani San and the more recently arrived Mier community, both of whom had long called the region their home before they were removed. A lodge called !Xaus was also built on this land on behalf of the Khomani and Mier, with employees recruited predominantly from the same communities. These communities also receive a substantial share of the revenue from the lodge.

Whether such initiatives are the answer when it comes to the particular case of rhino poaching remains to be seen, but moving the conservation conversation further in these kinds of directions surely can’t hurt. After all, for all the other measures that have been introduced in the past few years, the number of dead rhinos continues to grow.  South Africa needs all the help it can get to turn this situation around.  Paradoxically then, with a little more open-mindedness, the poor and disenfranchised rural-dwellers so often condemned as the villains might come to be the best hope of saving the day.