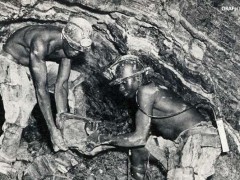 Roughly six weeks after 34 striking miners were gunned down by police at the Marikana platinum mine in South Africa, the strikes are over and the miners have all gone back to work, having finally agreed to terms on a pay increase slightly lower than their original demands.  The dust seems to have settled, or so, at least, our president Jacob Zuma would have it. In his recent speech to the UN General Assembly, not even a fleeting mention was made to Marikana, to miners, or to mines.

But in a country whose post-apartheid history and development have always been intrinsically linked to, sustained by, and built on mining, we should wonder what might be still lurking beneath the surface. This was not, by any stretch of the imagination a simple issue of salaries. Surely the numerous other issues that prompted such fervent and angry unrest in the first place and eventually led to so much bloodshed at Marikana did not exist in a vacuum? Nor then should they be interred so quickly, especially when world media has been watching and demanding answers.

It is true that South Africa is no stranger to massacres, nor to social and labour unrest, but that does not mean that we should just accept it all in the same way that us Capetonians accept our unpredictable weather. And Marikana was, by all accounts – for “some have compared it to the Sharpeville massacre, when white policemen killed 69 people at a protest in 1960” – a very different kind of storm from what we are used to. All our other “famous” (for want of a better word) massacres occurred under the brutal and oppressive apartheid regime. Marikana was very much the product of an apparently free South Africa.

So, we might ask, what happened to all the changes that South Africans were promised when apartheid packed its bags over 18 years ago? For the fact is that whoever is to blame, Marikana shows in no uncertain terms that many black South Africans remain underpaid and underprivileged, still living in shacks; geographically, socially and economically bound to a colonial and apartheid legacy of exploitative and often unsafe labour, and potentially at risk of being killed if they protest their lot.

While the police may have pulled the triggers at Marikana, there is no doubt that the government cannot, despite their best efforts, escape all responsibility for this situation.  They made promises, and they have failed to deliver them. While their failure may be down to an incredibly complex range of issues, it remains, in itself, a very simple and non-negotiable truth.

Part of the problem would appear to be in the current volatile political climate throughout South Africa. An increasingly factionalised ruling African National Congress party (ANC) appears to be cannibalistically devouring itself. Meanwhile one of its own prodigal sons, the firebrand and frighteningly popular Julius Malema (former leader of the ANC Youth League), just will not be shut up as he continues to stir up trouble and call for Zuma’s head, the nationalisation of mines and the repossession of white-owned land without compensation for current owners. Many South Africans are increasingly worried that they might soon have another Zimbabwe on their hands, whilst a host of brutally massacred black miners certainly won’t have hindered the impact of Malema’s rabble-rousing outbursts.

Meanwhile, many academics have jumped on the “resources curse” bandwagon in the wake of the massacre. But liberal use of this tired cliché (seemingly reserved exclusively for Africa) would appear to be counter-productive. South Africa has recently agreed to up its game in extractive-industry transparency through the Open Government Partnership. This innovative American-based programme, which currently includes eight countries, looks to increase commitments to running public finances in an open and transparent manner. Furthermore, South Africa is due to chair the Kimberley Process – a joint government, industry, and civil programme which looks to stem the flow of conflict diamond mines – in 2013.  The critics’ energy then would be much better directed at highlighting this progress and examining how South Africa might make further steps towards improving an industry that, for better or worse, is the lifeblood of the largest economy in Africa.

But whatever the mid and long-term goals might be, the ANC leadership conference in Mangaung is only months away in December, whilst general elections are looming in 2014. There is an increasing feeling that sooner or later both Mr Zuma himself and his ANC government will have to be held accountable for their failings over the last 5 years, and for the continued state of hardship that so many of South Africa’s citizens remain subject to. After all, Zuma was elected as a populist, a man of the people who would fight for the people, yet the way in which he so emphatically washed his hands of the Marikana debacle at the UN Assembly shows the dichotomy that has developed between lofty ANC rhetoric of “a better life for all” and on the ground reality.

The ANC must realise that Marikana was not a flash in the pan. It is a culmination of widespread anger, disillusionment and inequality, many of the same symptoms that led to the horrific xenophobic violence that swept through South Africa’s townships in 2009. Both incidences should prompt a long look in the mirror for all of us in South Africa.