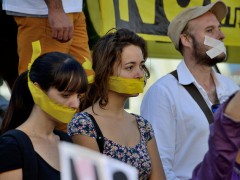 No Somos Delito activists silence themselves in Madrid against the People’s Party Citizen Security Law, by Adolfo Lujan on Flickr (CC BY-NC-ND 2.0)

The US journalist and Pulitzer Prize winner Glenn Greenwald recently wrote an article on The Intercept titled: “The greatest threat to free speech comes not from terrorism, but from those claiming to fight it”.

In the UK, during the Queen’s Speech the new measures included in the Counter Terrorism Bill have been announced and in Italy an anti-terrorism Decree has received parliamentary support in April.

But terrorism is not the only pretext taken by Western governments in order to pursue draconian law-making, sometimes it is just about dissent, as in the Spanish case with the Anti-Gag Law, criticised also by a group of UN experts.

Spain is one of the countries that have suffered most the Austerity practices and on the social front it experienced a massive rise of social protests, focused around the Indignados movement that inspired the whole set of Occupy movements.

The social crisis in the Iberic country has been described in detail on Future Challenges by Esther Ortiz  , Spanish journalist from Madrid.

On the connection between the current Spanish context and the Anti-Gag Law Ortiz said: “[The Anti-Gag Law] is possible only because of the economic, social and political crisis that we are living and of which the EU is also responsible. This law assures that it would be possible to proceed with the austerity measures required from Brussels by containing the protest with anti-democratic tools”.

This law, passed by the People’s Party will make illegal to protest outside government buildings, insulting police officers or refuse to show identification documents, while disrespecting police officers , photographing or filming them will incur in fines ( 600 and 30,000 euro respectively).

The Anti-Gag Law and the People’s Party agenda aimed at silencing dissent found attention in the international arena back in April 2015, when the Hologram March, the first of its kind was realised in Spain;  this protest found major media coverage on the New Yorker, CNN and BBC among the many.

While I was in Madrid last month, I had the chance to speak with Monica Hidalgo, Spoker person of No Somos Delito on the Anti-Gag Law at Patio Maravillas , a multi-purpose autonomously-governed space in the city centre.

On the coverage given to the March of the Holograms, Hidalgo lists an interesting paradox: “ The Hologram March was featured on the New York Times, but in the Spanish media we were quoted on El Pais only in the local section”.

This paradox from another perspective appear to be far from surprising as: “The problem is that Spain media ownership belongs to groups that don’t want to create friction with the government and there is not independence in Spanish media, excluding independent and digital ones ”.

Monica explains: “The Hologram march was meant to be the first and only one of its kind in history as we plan to keep on taking the streets. It was meant to put under the spotlights what drives our protest and this context of total dictatorship”.

While the Anti-Gag Law represents a jump back into Franco’s Spain, it does not appear to represent a surprising evolution, but is rather inserted in the legislative path followed by the ruling People’s Party Rajoy government.

Hidalgo explained this path: ” The current People’s Party government policies have driven many people in protesting in the streets, given the heavy public cuts, especially in the health sector. What’s the way to avoid that? The PP rules for the ‘silent majority’ that does not protest, but people have much less to lose now and therefore less fear. The introduction of this legislation has the effect of discouraging dissent, in front of fines of 30,000 euro for protesting in front of the Spanish Congress”.

The reform of the Penal Code as Hidalgo explains is inserted also in a path filled of further plans to criminalise not just dissent, but also poverty and in general crushing the social groups suffering more from the austerity’s consequences.

On the political front, as the PSOE signed with the PP the Anti-Terrorist Pact, also filled with draconian measures as well as with ambiguous measures, it seems that there is not huge appetite to protect freedom of speech, with the exclusion of forces like Izquierda Unida (United Left) and Podemos . In the discussion, Monica shows how much in her words Spain has represented a “political laboratory” for European repressive laws in these years

A similar set of policies should drive indignation in the European context and raise opposition and mobilisations. The Anti-Gag Law will enter in practice on July 1 and when this will happen, a dangerous precedent will be set in Europe as well as a case for imitation, in a grotesque way given the fact that months ago European leaders wanted to show to the world their stance against the enemies of free speech in the streets of Paris.

In the UK context, the Tories plans of scrapping the Human Rights Act and ending the right to strike can also be inserted in a European scenario of progressive civil rights limitation.

A way  used by No Somos Delito to spread awareness on the Anti-Gag Law is represented by the Teatro Denuncia : “Teatro Denuncia represent a different way to spread awareness in front of subway stations, public squares, community centres by performing and informing people on what the implementation of the Anti-Gag Law will mean in their daily life. The idea is also to encourage a debate with the spectators and to involve”.

The fight against the Anti-Gag Law should involve grass-roots organisation, pressure movements, social movements, civil rights groups all over Europe. This is not just a Spanish challenge, it is an European challenge, one which could very much determine our future of active and not passive citizens in the Old Continent.