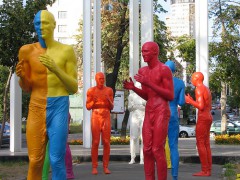 Sasha and I were colleagues in university. He was a mediocre student. After graduation I didn’t manage to find any work paying more than 30 euro a month. So I started my “career” as a clerk in a music shop. One day Sasha dropped by and said he was going to leave for Portugal. “I don’t have any papers or work permit,” he said “Some people will smuggle me in a minibus through Europe and I’ll get work on a building site there”. I shook my head in disbelief: “Sasha, are you crazy?” – “You’re the crazy one – he cried “Working here for 30 euro a month with your diploma!” to which I replied “50 euro and I could have 70. There’s a world of difference, Sasha!”

We met again 5 years later. Sasha looked like… “a world of difference” is a nice definition I’d say. Last time I saw him he had a crewcut, but today… Do you remember Anthony Kiedis in “Under the Bridge”? Only Sasha’s hair is much longer! Sasha learned Portugese, which made me speechless, given how unambitious I knew him to be. Thanks to his language skills he obtained a work permit, got a job as a waiter and married a local girl. He spoke with a light accent about how he was going “to save his father” by moving him to Portugal too. The Ukraine made no sense at all for Sasha now. I was then working as a journalist and dreaming of moving to Kyiv, the capital. A “magical mystery tour” in a minibus was simply too much for me.

Natalka was also a colleague of mine. She was dissatisfied with her work as an Ukrainian journalist. “After the Orange Revoluiton we have too much freedom of speech,”  she said. ” It’s wrong. Journalists write anything they want. They don’t have any respect for State Power and officials. It’s awful! And this ugly Ukrainian language! Only yahoos speak it, but they want us journalists to speak it too! I’d like to move to Russia. Russians have Strong Power, no idle chitchat in their media, and my children will not go to an Ukrainian school”. I tried to argue against her totally absurd point of view, but in vain. I guess she’s become a very important spare part in Putin’s propaganda system.

According to official data, about one million Ukrainians work in Russia and an equal number of them work in other countries. But illegal migration for work is several times higher and some experts consider as many as seven million people or 34.1% of the potentially active workforce are involved. Most migrants are energetic and enterprising. But why are Ukrainians searching for work abroad and how do they choose their country of destination?

If you are wise enough to study a foreign language and/or to have a high-tech specialty you can get some nice work in the EU. But most Ukrainians choose Russia, because it doesn’t make any great demands. Anyway most of them end up as what I’d term “hyper adapted”, forgetting their Ukrainian roots and acquired skills. With rare exceptions, Ukrainians choose other professions leaving their useless diplomas at home, they don’t speak their useless language which nobody understands and soon even the news from their homeland doesn’t interest them anymore. They are gradually realizing it is out of place to be Ukrainian here, it is better to keep silent about their past, because their past is like a suitcase without a handle – awkward and inappropriate.