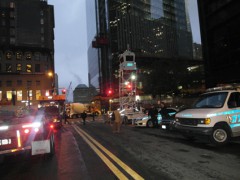 When you see this watchtower right next to Liberty Square …

… and then read these lines on JP Morgan’s website …“Beginning in 2010, JPMorgan Chase donated technology, time and resources valued at $4.6 million to the New York City Police Foundation, including 1,000 new patrol car laptops. The gift was the largest in the history of the foundation and will enable the New York City Police Department to strengthen security in the Big Apple. New York City Police Commissioner Raymond Kelly sent CEO and Chairman Jamie Dimon a note expressing “profound gratitude” for the company’s donation. “These officers put their lives on the line every day to keep us safe,” Dimon said. “We’re incredibly proud to help them build this program and let them know how much we value their hard work.”

… then it’s hard NOT to connect the dots! Isn’t it?

It’s simple economics. The police operation “to protect Wall Street bankers from the Occupy Wall Street protesters” is costing millions of dollars. With the expectation that the protests will grow in size, the financial cost to police will become enormous. Electronic surveillance is much more effective and efficient. The donation of JP Morgan will push the police to use alternative tactics, such as electronic surveillance and control of cell phones, bank accounts, credit cards, and more …

Since the the police set up the protestors on the Brooklyn Bridge for mass arrests 2 weeks ago – surveillance is a HUGE issue. The protestors were initially marching on the pedestrian walkway, and a huge row of cops had shut down the bridge in the direction towards Brooklyn, luring demonstrators into a trap by creating the appearance that it was permissible to walk on the road. When the crowd moved onto the road, a new row of officers sealed them in from behind, rolling out thick orange tape, and they started arresting people indiscriminately without warning and provoking violence (see live video footage here). In one of the largest mass arrests in American history, the NYPD incarcerated over 700 people, forced them to sit in massive buses, about ten vehicles in total, and sent them to prison. Everyone was terrified.

A guy I’ve talked to yesterday said: he came to Wall Street precisely because he had heard about the police brutality two Saturdays ago and wanted to resist such brazen violations of his rights, which he thinks “is a reason to be deeply concerned. If you don’t exercise your rights you’ll lose them.”

There are rumours that the CIA trains the NYPD, which is illegal—the CIA is required to engage only in foreign affairs — and that they spy on conversations and online activities.