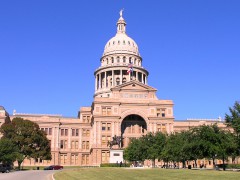 The United States of America faces a number of grim issues- disparity in income and wealth, the consolidation of power, the erosion of civil liberties- all of which are not being adequately addressed by the current system of governance. One effect of this is that Americans’ interest in a socialist form of governance, especially among young people, seems to be on the rise, even in the great state of Texas, which is the last place you’d expect to find socialist public policy.

In two recent Rasmussen surveys, it was found that Americans under 30 are virtually divided between their preference for capitalism or socialism while another Pew Survey found those aged 18 to 29 have a more favorable reaction to the term “socialism” by a margin of 49 to 43 percent. These people who are becoming more interested in alternative forms of government will inevitably be the next generation controlling America’s political system.

Currently, new models of socialist structures — such as worker cooperatives, municipal social policy, progressive forms of taxation, and effective organizing for unions — are being considered in the United States as alternative means for democratizing the ownership of wealth and distribution. Increasingly, issues regarding healthcare, education, economic redistribution, abortion, and legalization of marijuana are resolved at the state level and it is here where we find these alternative models at work.

Having recently moved to Austin, the capital of Texas, I found some public programs and policies that take alternative approaches to the public ownership of wealth and distribution at state and municipal levels. Texas has an acrimonious relationship with the idea of socialism. In the 2012 Republican Presidential Debate in New Hampshire, the Governor of Texas Rick Perry derided President Obama for being a socialist because he wanted a “more powerful, more centralized, more consuming and costly federal government.” Later in 2012, conservative and religious groups were outraged by a sixth-grade class project that tasked students with designing a flag for a new socialist nation as part of the state’s curriculum used in over 70 percent of Texas’ school districts. The complaints ranged from “anti-Christian” to “openly socialist,” with Sen. Larry Taylor (R) remarking he found it “very egregious as a Texan and an American,” while an article in the Texas CSCOPE Review accused Obama of “teaching our children how wonderful socialism is and that communism is even better.” Considering all this, I didn’t expect much to be going on in regard to socialist governance in Texas.

Texas is dominated by Republicans – during Governor Perry’s tenure it has been a lopsided state with Republicans outnumbering Democrats in the state legislature 114 to 67. Since 1980, the state’s 38 electoral votes have gone to Republican candidates in every presidential election. When outsiders think about Texas, it’s probably about cowboys, oil, barbecue, football, and capital punishment, as Texas has carried out nearly 40 percent of the executions in the US since the death penalty was reinstated in 1976. In any regard, it is a micro-nation unto itself, full of proud Texans who would just as soon secede than bow down to the machinations of big government. Just the other day I saw a bumper sticker that read: I’m from Texas, what country are you from?! This overtly nationalist, secessionist rhetoric isn’t new; a few years ago Governor Perry implied that if Washington didn’t stop “meddling in his state”, independence might be an option.

So why look at Texas for examples of successful socialist policy? Texas is unique because of its low taxes, free trade policy and minimal regulation. Importantly, it is the world’s fourteenth largest economy with vast oil and gas reserves, international shipping ports, independent power grid and a laissez-faire approach to enterprise. But underneath its brazen attitude and conservative majority there are some interesting things going on that give insight into alternative models of governance, many of which have existed for decades and could help redefine economic and social ecology across the nation. If you ask a typical Texan about this, they’ll most likely give a polite nod and downplay the implication by remarking that it doesn’t matter what you call it politically, it’s just good for Texas.

Austin Energy is the nation’s 8th largest community-owned electric utility, serving more that 42,000 customers and a population of almost one million, with annual revenues totaling $1.2 billion. Each year, this publicly-owned power company, returns profits to the community to help fund city services such as fire, police, EMS, parks and libraries. Since 2010, its contributions have totaled more than $100 million annually. In 1990, the utility developed the nation’s first and largest Green Building Program, which continues to be the most successful building program in the country. According to their website, approximately 15-17 percent of its power comes from renewable sources such as wind and landfill methane gas. The utility expects to reach 30-35 percent renewable energy and to achieve a CO2 reduction goal of 20 percent below 2005 levels by 2020.

Another great example is the Texas Permanent School Fund (PSF), which was created with a $2,000,000 appropriation by the Texas Legislature in 1854 expressly for the benefit of public schools in Texas. The Texas Constitution of 1876 allocated half of Texas’ remaining public lands – including sales, trades, leases and improvements, as well as administration of contracts, mineral royalty rates, and other transactions – to generate income primarily through oil and gas revenues, but also through land sales and leases for surface uses, with all proceeds from the sale of these lands intended to go to the PSF. Each year the interest earned on this publicly-owned fund is distributed by the State Board of Education to every school district in Texas, totaling approximately $2 billion in the last two years alone. The PSF also guarantees bonds for local school districts, enabling them to pay significantly lower interest rates on their debt.

The Development Corporation Act of 1979 deserves mention here as well. The Act gives cities the ability to finance new and expanded business enterprises in their local communities through economic development corporations. The Local Government Code authorizes cities in Texas to adopt a sales tax to fund the corporations and define the projects they are allowed to undertake. The funds go to industrial development projects such as business infrastructure, manufacturing, research and development, as well as military base realignment, job training classes, public transportation, parks, museums, sports facilities and affordable housing.

These models and systems that may seem untraditional through a capitalist lens are often labeled socialist, yet have shown to be quite successful, even in a pro-capitalist state such as Texas. This is not new, nor is Texas an anomaly: North Dakota, another pathologically Red State, has the country’s most socialist banking system where all public revenue is run through the Bank of North Dakota and is reinvested into the state’s small businesses and public infrastructure. At the national level, perhaps we should take a lesson from the Texan outlook: if it’s good for the country, then who cares how we label it? Socialism, if anything, provides us with a political space to consider opportunities for better governance and it is how we engage the major issues within that space which is important.