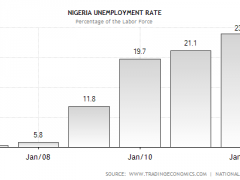 A young woman struggles through university, enduring a few strikes, disreputable advances from cultists, depraved lecturers and other similar low-life and manages to graduate with a second class upper degree, maybe even a first class.

She’s from a low income family, maybe the first or second from her kindred with a university degree. Let’s assume she studied engineering. She starts to pound the streets, searching for a job to enable her demonstrate the epitome of brilliance that she is.

Four years and numerous interviews later, she settles into tailoring, some craft or the other, or if she’s very lucky, a marketing job at a bank where how far she’s willing to go determines how far she and her career there will go. Welcome to Nigeria, and the circle of unemployment. So, now you know precisely where.

What is the problem?

Cliched as it sounds, corruption is the foundation on which unemployment has blossomed in Nigeria. Economic growth has been greatly stunted over the years by military rule, ill-thought out and inconsistent policies, and negligence of human resources. Not forgetting the evil called Federal Character which essentially gives a job to an ill-equipped indigence of a state over a suitably qualified non-indigence. Add nepotism, unemployable graduates (thanks to a rotten education system) and the picture is almost complete.

Why does this problem exist?

When did it get this bad?

Clearly, it didn’t happen suddenly. There has been a steady rise in the number of unemployed in the country. Why hasn’t any government made creating jobs a priority instead of promising roads and bridges they eventually don’t build? And, by the way, when I say “jobs” I don’t mean the near-useless but well-paying jobs that our politicians are so good at creating for their praise-singers, thugs and hangers-on.

Considering the direct correlation between education and (un)employment, why isn’t there a bigger, goal-oriented budget for education? Education that prepares young people for the real world. Education that truly imparts culture and learning. “About 30% of Nigerian youth between the ages of 10 and 24 were not enrolled in Secondary School” – The Population Reference Bureau, 2006. If in the 21st century, we allow 30% of young people to avoid secondary school completely, what are we really saying? Aren’t we saying that we care but very little about the future? Can only go downhill from there.

Who is to blame?

In true ‘Naija’ fashion, let’s answer this question with a set of questions: