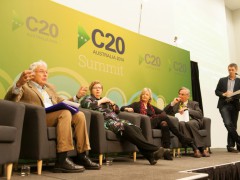 Just over a week ago I joined around 400 civil society representatives at the C20 Summit in Melbourne to draft a communique to present to G20 leaders for consideration in their deliberations during July and November. From the outset, tension hung in the air around the question as to whether participating in the Summit meant that we had already been co-opted and compromised by the G20 Presidency. Were we being manipulated to create the appearance of meaningful consultation, or could we truly represent, in the words of C20 Chair and World Vision Australia CEO Tim Costello, ‘the fragile hopes of those on the margin… [to] ensure that growth must not come at their expense’?

Summit delegates wasted no time in spelling out our dilemma: When many of the civil society representatives in the room believe that a continued obsession with economic growth is the very cause of social disadvantage and environmental degradation, how do we effectively communicate with a group of generally conservative governments whose stated aim is increased economic growth? How do we find any common ground and language with those who believe, as stated by Australia’s Foreign Minister Julie Bishop in the opening plenary, that ‘economic growth is the greatest weapon we have against poverty’, and that environmental issues like climate change are ‘not an economic issue’?

Members of the C20 Steering Committee quickly responded that there was no point in opening up the discussion to question economic growth. If we attacked the basic premise of growth to which the Australian G20 Presidency is wedded, nothing we said would be taken seriously. After all, we were told, the G20 meetings are designed to facilitate dialogue between the governments of the world’s richest nations specifically about financial and economic concerns. If we wanted to be part of the conversation, we simply had to use their language.

The C20 Steering Committee members suggested that we instead highlight practical, tangible measures that do not contradict economic growth, yet if put in place, would ensure action on the serious social and environmental issues we all face. This response was met with significant disgruntlement from a number of delegates who quickly pointed out that by continuing to refer to economic growth, even ‘inclusive’ or ‘sustainable’ growth, we were allowing ourselves to be co-opted into the very paradigm that we need to challenge, and that this left no space to talk about what is really important in helping us transition to a more socially just and ecologically sound economic system.

The quandary of how civil society can speak truth to power effectively is an all too common dilemma, especially in the current context that sees conservative governments around the world dismantling mechanisms designed to ensure social and environmental protection. So often this dilemma is reduced to a choice between being ‘pragmatic’ in order to remain part of the conversation ‘inside the tent’, or alternatively maintaining an ‘idealistic’ or ‘oppositional’ stance ‘outside the tent’. But is this really the only choice available to us – to talk to power or to fight it? Between what is ideal and what is pragmatic? Or is there a space somewhere in between the two, somewhere strategic?

Having sat through the sometimes quite heated and emotional discussions at the Summit, and having read the various drafts of the communique, I do believe that the intention of the C20 Steering Committee was to find some strategic middle ground in the hope of influencing governments to take action on two main issues – social and economic inequality, referred to generally as ‘inclusive growth’; and climate change as linked to ‘sustainable growth’. Strategically, the decision was made to focus on these issues to show not only how action on these areas is important for our current and future well-being, but is essential if we are to have a stable economy in the long term.

Whether the choice to accept the premise of ‘inclusive and sustainable growth’ in the framing of the document proves strategic in the long term depends on two main factors. First, it depends on whether the document is effective in encouraging individual governments to adopt the recommendations that will lead to greater social and environmental protection. Less obviously however it also depends on whether the document proves a useful tool that adds weight, substance and legitimacy to the calls from civil society for socially just and ecologically responsible economic change.

And herein lies the rub – civil society groups have a choice as to how they respond to the communique. As someone who called for a statement to be included in the document that highlighted the problems with privileging economic growth, the temptation to dwell on the limitations of the document is strong. And yet I am hesitant to give G20 governments an excuse to ignore the many practical measures they could put in place to invest directly in the wellbeing of both people and planet for generations to come, some of which are included in the communique. Nor do I want to undermine any future energy and efforts to speak truth to power and to hold governments to account for the impacts of their economic policies.

Supporting the use of the C20 Communique does not preclude finding other ways to communicate fully and without reservation the message that a narrow focus on economic growth is creating widespread suffering and environmental destruction and therefore ironically, any chance for a strong economy in the long term. We need to lobby hard using whatever means we have available – from mobilising the public to lobby elected representatives,  to effectively engaging the media, and participating in peaceful acts of civil disobedience to pressure governments to fulfil their obligations to look after the interests of all, not just the privileged few.

I hope there are protests at the G20 meetings in Cairns in July and in Brisbane in November: loud, colourful, creative, and most importantly, peaceful, protests. Protests that do not compromise or soften the message that not only is economic growth NOT the greatest weapon we have against poverty, but that on a planet with finite resources, it is a direct cause of so much inequality, environmental degradation and increasing conflicts over scarce resources.

Defending the use of the C20 Communique, as a document drafted ‘inside the tent’, does not contradict the point that we also need actions ‘outside the tent’. If we are to find our way to a time when the wellbeing of both people and planet is the guiding principle of any discussions about the economy, we need many voices speaking in many different ways, and we need them speaking the truth that we need economic change, not economic growth.

Amanda is the Director and Founder of the Centre for Social Change. The Centre supports people who are working to create positive social and environmental change around the world. With a background in Community Development and PhD in Human Geography, Amanda is passionate about working with communities to experiment with alternative approaches to local economic development.