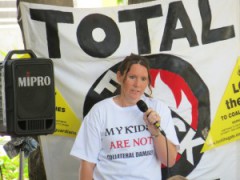 This recent article from Salon describes the evolution of a zero-sum game scenario between the Indigenous Amazonian Shuar tribe and international mining companies backed by the Ecuadorian government. The government clearly believes that it cannot remain viable without using Ecuador’s mineral resources as collateral for foreign loans. The Shuar, for their part, equate the mining of their ancestral homelands with total loss of sustenance and identity, and therefore see little choice but to stake their survival on the loaded dice of war.

Many Australians would struggle even to imagine participating in such a large-scale and potentially-lethal showdown between a community and a government-supported industry here today. Contemporary Australian life is so well-shielded from such nightmarish scenarios by comfortable buffer-zones of governance, geography, technology and wealth that to directly compare the plight of the Shuar with that of a rural Australian family impacted by mining expansion would not only be pointless but irresponsible.

Nevertheless, this video makes clear that Debbi Orr and the 26 member families of the Gasfield Community Support Group not only feel that they have not shared in the economic benefits which the new coal seam gas (CSG) industry has brought to their region, but rather perceive this industry’s encroachment on their land and lifestyles as an overall—and in some cases catastrophic—loss. For Debbi and many other residents of the Tara Estates, the profits made by QGC and Origin gas companies, the royalties levied from these companies by the State Government, and the high incomes now flowing from the CSG industry to local workers and businesses, are all benefits from which they are excluded, and yet which have only been made possible at their direct expense.

Listening to the November 2012 video-interview with Debbi Orr, it is difficult not to conclude that she and the community she represents still have more to lose–economically, socially and in terms of health–in what looks increasingly like a zero-sum game. The stakes in places like Tara, Kogan, and Wieambilla are neither as high nor as absolute as those currently on the table in Amazonian Ecuador, but the same basic equation is most certainly in play.

To find out more about the CSG industry in Australia, try these links: