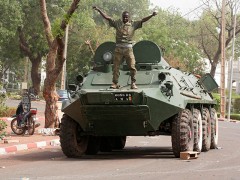 The awaited elections are marked with conflicting national interests, complicated logistics and heavy international pressure, more importantly, the resumption of foreign international aid. ECOWAS negotiations with the junta leaders days after the coup dictated a swift restoration to democracy with elections scheduled for April 2013.

For the international community, and the U.S. in particular, the elections are a priority so that (.pdf), a “democratic government provide the strong leadership necessary to negotiate a political agreement with northern rebels, reform its security sector, and lead a military intervention in the north to restore and maintain Mali’s territorial integrity.”

Aside from territorial integrity, the well being of all Malian citizens is at risk. Historically heavily dependent on foreign aid, this assistance has financed basic human needs and services as well as more diversified development initiatives. From 1991 (the previous and peaceful coup that resorted democracy after 27 years of dictatorship), until today, aid to Mali has doubled. In 1991 Mali received about $500 million in aid funds; by 2011 the reported amount was $1.4 billion, the U.S. providing about $173 million in FY2011 alone.

This was all possible due to a 20-year streak of stable democratic government in a region plagued by democratic instability. However, Mali has largely remained one the poorest countries in Sub-Sahara Africa with a Human Development Index (HDI) ranking of 182 out of 186 total, and a negative GDP growth rate.

Knowing the direct impacts of foreign assistance are publicly available and widely publicized by donor agencies (indices of vaccinations, famers trainings, people fed, students in schools, roads built, etc.), but the economic impacts are harder to quantify. Until 2011, donor budget support (money given to treasury directly and administered by the government) had risen steadily. Between 1991 and 2005 the foreign aid comprised a large 27.6% of the national budget.  All these funds were suspended in 2011.

So with all that money, where is the development?

As with many developing countries, Mali is no exception to the plague of corruption, ranking 2-3 (0 being the most corrupt) in a corruption perception index over a 10-year period. Many of these treasury controlled funds were mismanaged and embezzled; some even claim funded militant and extremist groups for years. Though data doesn’t show a direct correlation to these assumptions, the overwhelming civic support for the coup highlighted the populations’ frustration with these practices in an otherwise “exemplar” democracy.

Many countries, like the U.S. are prohibited to disburse foreign assistance to democratic governments deposed by a military coup. However, the USAID has released $80 million for crisis relief focusing on critical initiatives like food procurement, and $40 million in assistance to refugee camps have continued in the aftermath of the coup.

The departure of foreign assistance, as well as the physical presence of many international aid organizations has done more than shrink the national budget, thousands of Malian nationals employed by international agencies and NGOs lost their jobs. Workers said that wave of unemployment was a secondary, but much strongly felt economic impact, “of course the aid projects were important but the unemployment effects were worse – up to 30% of secondary or college educated youth worked for humanitarian organizations.”

Currently there are an estimated 200,000 displaced peoples; the distribution of voter cards and the establishment of voter stations have been hampered by a lack of logistical planning, oversight and a tight time frame. These elections are far from perfect or inclusive. Despite these challenges, the July 28th vote must occur; €3.5 billion have already been pledged for the restoration of democracy, order and basic services. More surely will come from the US and other countries, and the cycle will repeat again. But with such a divided (both geographically and ideologically) population and with little information about a transitional and reconstruction plan, the future of Mali’s democratic foundation seems shaky (again).

So, how much more money can be poured into development and how to prevent another crisis?

Perhaps the answer lies in prioritizing initiatives that would impact job creation, both in the public and private sector, focus on infrastructure development, and a decentralized fiscal policy that would attract FDI and encourage private sector growth.

Unemployed youth, militants and displayed peoples will have very little economic opportunity in a post conflict environment, and even a greater incentive to engage in the ever present illicit economy that has financed this and all previous conflicts to begin with.