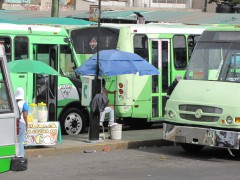 Mexico City, currently one of the 5 largest cities in the world, became a Megacity perhaps even before the term was created in the 1970s. During the 20th century, people from the whole republic moved to Mexico City, the capital, to try to find their way out of poverty. This trend created a strong tendency towards centralization that birthed what we know today as Mexico City’s metropolitan area.

With a total population of approximately 22 million people and steadily growing, stopping the expansion of Mexico City’s city limits has become a great challenge. The uncontrolled and unequal growth over the years has made it today very difficult to deal with an accumulated list of problems such as social inequality, marginalization in the suburbs, lack of sustainable infrastructure and services; and in particular, huge traffic jams and enormous environmental risks.

According to the IBM´s Commuter Pain Index, Mexico City ties Beijing with a grade of 99 out of 100 as the cities with the worse traffic jams. This isn’t surprising considering the fact that each year there are more cars sold than babies born in Mexico City, approximately 600 additional cars on the streets each day.

This growing trend is due to Mexico City’s urban sprawl. Long distances separate citizens’ residences from their work places, usually ruling out walking or biking to work or school. Furthermore, Mexico City’s public transport exists but is not sufficient in both reach and capacity.

Despite having more than 200 km of metro lines, 420 km of trolley buses and more than 30,000 buses and taxis wandering around the city, it is simply not enough for Mexico City’s vast population. Public transport seems to be slow and unorganized; consequently, private vehicles are almost always necessary (even though the average speed for them is only of 17 km per hour in the city).

While traffic jams create a tough time for drivers, private vehicle are still the preferred mode of transportation (when possible to use one), considering that public transportation is often overcrowded, unreliable, and lacking the proper connections to get from place to place conveniently.

However, the huge number of vehicles in the city lowers the standards of living and endangers not only health and productivity, but most of all, the situation of the environment.

Air pollution in Mexico City has been a compounding problem for several years. In fact, during the 1990s the air in Mexico was considered by the UN as the most polluted on the planet. In the same year, a harsh system of verification for vehicles and non-circulation days based on the status of the automobiles was introduced as a measure that would temporarily control the situation. Unfortunately, even though it was later permanently imposed, this was not a completely effective long-term solution.

Today, the annual polluting emissions of Mexico City are still about 3,776,000 tons, from which 65% presumably correspond to the usage of vehicles, 30% of the vehicles over 20 years old.

What are the prospects of sustainable solutions to the growing problem of air pollution? The government has been working hard on a Green Plan, –based on a medium and long-term integral model that aims to involve the whole society into finding sustainable solutions for the city– which deals with optimizing public transport, rehabilitating the roadways, correctly managing resources, and creating healthy public environments among other goals.

The Mexican government is investing millions of dollars annually to try to enhance urban mobility in the city. Building a 12th line for the already modern metro, working on the innovative system of the Metrobus, replacing the old taxi fleet with new environmental-friendly vehicles, promoting bike riding, and trying to implement mandatory public transport for students –even though this last measure wasn’t really accepted by the people– have been some of the actions promoted by this plan.

For the first time, the Mexican government has considered the environment as a primary objective, and the Green Plan has been a good start. Unfortunately, the lack of planification of the city makes it very difficult for the government alone to fix in the short term a huge list of problems that have been accumulated over the years.

It is both the task of the people and of its functionaries to work hard on recovering the good quality of the environment, and perhaps, the first thing that could be done is to reduce traffic congestion and thus carbon dioxide emissions. Indeed, this must be one of the first aims if we ever want to accelerate the process of turning this “Mega City” into a “New City”.