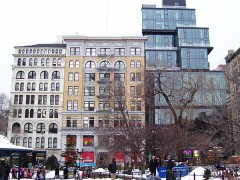 The 2012 U.S. presidential candidate Mitt Romney may have drawn guffaws and jeers for his wide-grinned proclamation that “corporations are people,” but there is some truth in that comment. At least in spirit. It’s no secret that the United States government is largely driven by the aims and actions of corporations. Corporations exert influence in numerous ways, from making unlimited contributions to get candidates elected (watch activist Annie Leonard’s explanation of how the Citizens United vs. FEC case made this possible) to participating in the “revolving door” of hiring the former public officials who wrote the opaque regulations with which companies must comply.

Such corporate influence is dangerous because legally corporations are designed with one aim only: to maximize shareholder profit (NB: there is some debate over whether this indeed is the only corporate duty. See the commentary from Leo Strine, the Chancellor of the Delaware Court of Chancery, to learn more). In other words, corporations’ sole goal is uninhibited growth at any cost.

There’s nothing inherently wrong with profit or growth — the upside drives entrepreneurs to innovate which ultimately benefits society as a whole. The problem is that current corporate structures fail to promote inclusive growth over growth that is short-sighted and societally harmful (e.g. growth that leads to oil spills and financial meltdowns).

So how do we distinguish the good from the bad? I propose a simple delineating metric: growth is good only if profits are aligned with real societal value. But in an age when sugar water and fossil fuel companies reign supreme, how can we even begin such a paradigm shift? Short of a constitutional amendment banning corporate political spending, political reform is tough because laws can always be overturned by future corporate-funded governments. Risk scholar Nassim Taleb has suggested a number of reforms including a salary cap for anyone who leaves the public sector for the private sector (lessening incentives to write complex regulations which only they can help future employers decipher). Such sorts of suggestions are useful, but fail to touch the root of the problem: corporate structure or DNA. The B Corp movement, however, does.

I was fortunate to hear B Lab co-founder Jay Coen Gilbert speak at SXSW Eco about B Corps and Benefit Corporations (B Corps is a designation like a Fair Trade label conveyed by the non-profit B Lab; a Benefit Corporation is a legal corporate structure available in numerous states). A benefit corporation is defined as a “business entity the purpose of which is to create benefits for the public in addition to generating profits for the entity’s owners.”

When faced with a decision to choose between two product inputs — one cheaper but more toxic for the community in which it is created — a B Corp would have the legal ability to choose the one with a slightly lower margin, but higher overall value, without fear of a shareholder lawsuit.

Although the movement is nascent, there are already 842 B Corp certified companies in 60 industries spread among 27 countries. B Lab has also worked with 20 states, including corporate-haven Delaware, to pass laws allowing for the formation of Benefit Corporations. Some may argue that while this is a great idealistic movement, its values are unlikely to permeate into larger corporations. Yet I remain unfazed. As we’ve seen with countless tech startups over the last decade, it doesn’t take long to become established. The lifecycle of most companies on the Fortune 500 list is a few decades at most. By empowering purpose-driven entrepreneurs to codify their missions into the DNA of their startups today, we have real hope that some of those companies will be large players tomorrow. Others will get acquired by current industry leaders and help to change existing internal culture. And still others will provide more localized alternatives to mega-corporation products and services.

This is not to say that the B Corps movement is not without its weaknesses. Third party verification of social and environmental standards is always subjective and the difference between B Corps and Benefit Corporations is confusing. Fortunately, the B Corps movement doesn’t need to be perfect. Even if it amounts to nothing more than a collective push for what a 21st century business ought to look like, it is still valuable. By changing the way that people think about corporate DNA and giving them a legitimate avenue to act on their newfound knowledge, we have already made the first big steps toward a future of more inclusive growth.