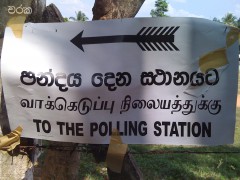 A democratic state by definition leaves political leaders at the mercy of voters, but one look at Sri Lanka’s provincial council elections is enough to bring you back to reality: in this island nation the voters may speak but it is the politicians who will be heard. The elections in Sri Lanka have become a stage for establishing the ruling party’s popularity.

A polling booth in Sri Lanka with both Sinhalese and Tamil wording – Credits: Charaka on Flickr, CC by 2.0

The Department of Elections has announced that President Mahinda Rajapaksa‘s United People’s Freedom Alliance (UPFA) won 12 seats in the Eastern Provincial Council, while the Tamil National Alliance(TNA) has secured only 11. Now, while it may seem like the UPFA has not won enough seats to form a single-party government, to muster a majority it may well get the support of a Muslim party which managed to secure seven seats.  The TNA, which hoped to win these elections, has received a major setback in its plans for more power-sharing in these Tamil dominated areas.

Clearly, the absence of any major political opposition in Sri Lanka, and the continued support for the President and his government from the predominantly Sinhala constituency, is making any significant representation from the Tamil community increasingly difficult. One of the basic requirements for a fully functional democracy is the presence of an opposition party. Checks and balances are essential for democratic processes to be carried out effectively. In Sri Lanka, one sees more political agreements than disagreements which makes it difficult for the Tamil community to have a say in the development of the country. President Rajapaksa’s victory in the provincial council elections is timely as the country is due to appear before Sri Lanka’s Universal Periodic Review (UPR) in Geneva.

The turnout of voters in Batticaloa, one of Eastern Province’s three districts, was low this time around. ” We did not see as many Tamil people coming out to vote in these regions, we were at least hoping to win in our (Tamil) areas  and make a difference in the political set-up with proper representation,” says a local Tamil from Batticaloa. The Tamils have always maintained that ever since independence from Britain in 1948 governments have sponsored Sinhalese settlements in the eastern province with a view to changing its demography, and according to the Associated Press, “Tamil Tiger rebels fought over three decades of civil war in the hopes of creating an independent Tamil state in a merged north and east. The war ended in May 2009 when government forces defeated the rebels.”

While the government is caught up in the election race, some important issues are getting sidelined. The World Health Organization (WHO) has “urged the government to formulate a regulatory framework to control the quality of imported fertilizers and pesticides and test them for nephro-toxic agents such as arsenic and cadmium as they are known to cause kidney diseases ” and went on to say that “Research has shown that water in the North–Central and the Uva Provinces is contaminated with arsenic and cadmium. Around 20,000 people have been affected by the Chronic Kidney Disease of Uncertain Aetiology (CKDu) in the two Provinces…. Analysis of 32 samples of agrochemicals had shown that 10 per cent of the samples were contaminated with arsenic and 20 per cent were contaminated with lead.” These health issues need immediate attention and while the areas (North-central and Uva Provinces) affected are predominantly Tamil, lack of representation in the government makes it impossible to bring the issue to the fore.

The Sri Lankan doctors’ union, the Government Medical Officers’ Association (GMOA) stated that the doctors in Sabaragamuwa Province were on strike. The GMOA demands that the Ministry of Health immediately implement the transfer of the Provincial Directors of Health of the North Central, Sabaragamuwa, Central and Uva Provinces. Meanwhile, marking of  GCE Advanced Level examination papers has been postponed because of a strike by university teachers demanding a salary raise. Currently, only a fraction of GDP is allotted to education and university teachers and educators want more. The government has not made this a priority and is instead focussed on the elections. With a country that has its health and education sector in complete turmoil, focus on winning a election seems like a rather futile exercise in development.