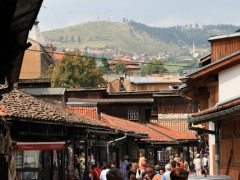 Riding the subway in Chicago recently, I saw an advertisement for the popular American television show “Two and a Half Men.” The punch line of the ad was “men will be boys!” I’ve seen the show a few times (ironically, on TV in Croatia), and I’ve gathered that the protagonist is a hedonist 30-something male who is so fixated on enjoying himself and his freedom, that he treats his human relations, particularly those with women, as mere “experiences.” He maintains the childish belief that the world exists to fulfill his desires, and he enjoys fulfilling them whenever he likes. While this character is, of course, a two-dimensional version of a real person, it is hard not to recognize parallels in the “real world.” Literature tells us that this character-type is nothing new in human history. But as women in many parts of the globe are taking on more responsibilities and outstripping men in terms of academic performance (yet still lagging behind in terms of representation and salary in the workplace), it leads me to wonder about the impact and prevalence of this “type” in today’s world, when and where he does appear, particularly when it comes to his relationships toward women, whether mother, sister, or partner.

It’s a question I’ve asked myself for some time, in both of the places I have spent the better part of my 20s: Chicago and Sarajevo. While I do believe that the situation in the United States is interesting in its own right, I have noticed a phenomenon in Sarajevo that I find particularly striking and which I think deserves attention: I have met countless women (particularly among the urban, middle-class) who are far more ambitious, hard-working, and sacrificing than the men in their lives. They are often the breadwinners in their relationships, not the other way around. The breadwinner part may not be a problem in-itself, but coupled with other gender dynamics, it does present a complicated predicament. Here is a list of actual situations I have encountered (presented anonymously), which I have found not to be isolated incidences:

Women and men pass through Baščaršija, Sarajevo’s old bazaar and the historical center of the city

My intention is not to villainize men or cast women in the role of victims. While of course there are cases of victimization, most of the situations I am describing are more complicated than that, and it is not clear who is to “blame,” if anyone. Rather, this is a social trend that I think deserves attention.

What is going on seems to have something to do with the fact that Bosnia is, like many places, a generally patriarchal society, where men are often taught to value themselves above women, and women are taught to care for men, particularly their sons, as if they were incapable of taking care of themselves – a pattern which persists beyond childhood. This is exacerbated in the post-war period because the ratio of women to men is high, and in 21st century Bosnia, women are often expected not only to have careers but to be attentive mothers and wives as well. The resulting situation is that many women have lowered expectations from their significant others and family members, and don’t feel in a position to demand more. It is not that they are necessarily oppressed by the men in their lives, but that the general social atmosphere itself normalizes these depressing situations. Women do complain, but because some  don’t see a much better alternative, many learn to live with it, or make jokes out of it, or resolve to be alone.  Many men seem entirely oblivious or they simply don’t care – they don’t have much motivation try harder. Being a man is proof enough of their value.

Some disclaimers: there are numerous positive counter-examples to the situations I am describing; not all women seek male partners; the roles can be reversed; and it may be that gender dynamics among rural/ low-income populations are different, either for better or for worse. It is also important to add, that while generally a patriarchal society, Bosnia is not exactly a purely “traditional” society either: on many of the most essential structural levels, women and men share equal rights, and it’s important not to overlook that.

Indeed, gender relations, whether between members of the opposite sex or members of the same sex, are always complicated and are difficult to generalize about, as are the meanings of “masculinity” and “femininity” themselves. However, I do worry about the number of dissatisfied, over-worked, lonely women I have met in Bosnia and the number of men who don’t seem interested in reflecting on this or in having a healthy, mutually-supportive relationship to the women in their lives. I think this disconcerting trend has implications, not only for the structure of the workforce and the economy, but also for the expectations of the next generation in this small country in the heart of Southeastern Europe.