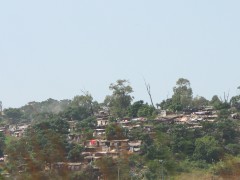 In the year 2008, for the first time in history, over half the global population were urban-dwellers. By 2030, more than 60 per cent of people are projected to live in cities.

The continent of Africa has the highest rates of urban population growth globally and millions of Africans are migrating within their countries, as an estimated 20 percent do not live in their birthplaces. However, the fact remains that the majority of Africa’s expanding urban population have cities as their birthplaces, not rural villages. As of 2010, Africa‘s 412 million city dwellers far exceeded North America‘s 286 million. It is estimated that by 2025, more than half of Africa‘s population (60 percent) will live and work in urban centers.

Compare this figure with 14.5 percent in 1950, 28 percent in 1980 and 34 percent in 1990. In 1960, Johannesburg was the only city in sub-Saharan Africa with a population of over a million; however, by 1970, there were four: Cape Town, Johannesburg, Kinshasa (in what is now the Democratic Republic of the Congo) and Lagos (Nigeria). By 2010, there were 33 African cities with populations of over 1 million, including: Addis Ababa (Ethiopia), Nairobi (Kenya), Khartoum (Sudan), Luanda (Angola), Harare (Zimbabwe) and Dakar (Senegal).

In response to a 1997 United Nations (UN) questionnaire, 42% of African governments expressed a desire to change the spatial distribution of their countries’ population. In 2007, this figure was 51%. Among African governments, there is a strong anti-urban sentiment, which manifest in laws and policies designed to curb rural-urban migration being passed in nearly 80% of African states. It is fairly intuitive that rural-urban migration means higher numbers of impoverished people in urban areas. However, it is arguable that the emphasis on rural–urban migration as the driver of urban poverty obscures underlying issues underlying Africa’s high fertility rates, including access to health services and women’s education.

Often, slums are used as proof of “over-urbanization” when they are more reflective of socio-economic inequalities within the nation’s borders- particularly disinvestment in rural infrastructure. Truth is, the slum is the unplanned and un-derserved face of poverty that cannot be ignored like it’s counterpart- the impoverished rural area. UN-Habitat defines a slum dwelling to be one lacking one or more of the following:

It was estimated that 61 percent of Africa’s urban households lived in slums in 2001. Compare this with 40 percent for Asia, and 32 percent for Latin America and the Caribbean (UN-Habitat, 2003a, page 246). The answer is not the criminalization of slums and slum-dwellers, nor is the answer forced removal of inhabitants.

What are alternatives to laws and policies that discourage rural-urban migration? What can African governments do to transform slums from the unplanned and un-derserved face of poverty to thriving communities with sufficient supporting infrastructure?