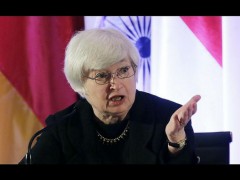 One need not be a conspiracy theorist to feel uneasy about the power of the Federal Reserve. The American central bank is the world’s most influential financial institution, controlling the supply of the dollar, the global reserve currency. Its objectives aren’t always straightforward, as are those of the European Central Bank. The Fed’s board of governors makes financial decisions which reverberate throughout all corners of the globe. Inflation-wary voices in the United States have intermittently called for the Fed’s mandate to be narrowed while voices in developed and developing economies alike have clamored for the dollar’s international dominance to be curbed.

The latest controversy stems from the unorthodox monetary policy known as quantitative easing (QE), a process by which the Fed has pushed down domestic interest rates and battled deflation through large-scale purchases of both government and private sector bonds. The third round of QE began in December 2012 and involved $85 billion in monthly bond purchases. QE pumped up the flow of dollars resulting in a greater supply of credit. This credit funneled into emerging markets in the form of purchases of dollar-denominated credit instruments like stocks, mortgage bonds and emerging market treasury bills in countries such as Brazil, Turkey, India, Indonesia and South Africa; markets where assets carried higher rates of return than in the US. Dependent on foreign capital, these countries were later dubbed the “fragile five.”

But as these capital inflows were driven by decisions made in New York, not Brasilia or New Delhi, decisions made there could easily reverse those flows. By spring 2013 the Fed began contemplating how to “taper” the pace of bond purchases; i.e. gradually reduce the volume of dollars spent on bonds each month. Fewer bond purchases would mean higher interest rates and a stronger US dollar, causing capital to flow back out of emerging markets and into the US. When the Fed commenced tapering in January of this year it stemmed the flow of additional dollars into the global economy, effectively reducing the supply of credit. At the time of writing the Fed is purchasing only $35 billion per month, with plans to wind down the program entirely by year’s end. With higher-than-before rates of return in the US, much of the existing supply of credit has flown out of emerging markets.

The Taper Tantrum by the Numbers

This emerging market hangover has been dubbed the “taper tantrum.” When then chairman of the Fed Ben Bernanke announced the intention to taper on May 22, 2013 developing countries were hit by capital flight: asset prices dropped, bond yields shot up, currencies depreciated and foreign exchange reserves depleted. Governments and businesses lost access to credit causing firms to go bankrupt and people to lose their jobs. While markets recovered somewhat by year’s end they dipped once again when the Fed actually scaled back bond purchases in January 2014.

Data shows that the abovementioned fragile five emerging markets have all taken serious hits since Bernanke’s initial announcement. Brazil, whose economy grew by 2.5 percent in 2013, is forecasted for only 1 percent growth this year. Indonesia’s growth is forecasted to drop from 5.8 to 5.3 percent; Turkish growth could drop from 4 to 3 percent. South African growth dipped in 2013 amidst talk of tapering and has also muddled through a sluggish 2014 (while these dips may appear modest to many readers, emerging markets are generally expected to have compounding growth rates as they recover from the 2008 financial crisis). While India’s growth rate is still expected to spike in 2014 one can only guess at how it would have been without the capital outflows resulting from Fed tapering.

The taper-induced downturn can also be observed through sovereign bond yields. Brazilian ten-year bond yields surged to over 13 percent as foreign investors fled the market. Borrowing costs spiked significantly in other fragile five economies as well; Indian yields climbed from under 7.5 percent to more than 9 percent when tapering began. Higher yields curtail the government’s ability to fund critical social programs like health care, education and poverty relief. It also accelerates the pace at which public debt grows, making governments more likely to eventually undertake costly austerity programs. While unexpected capital flight hurts all sectors of society, it is the vulnerable who suffer most.

The Problem is the Fed’s Size, Not its Behavior

Two main factors have contributed to the plight of the fragile five. The first lies in domestic policy. Each of theeconomies mentioned depends on persistent current account deficits financed through foreign credit. When that credit dries up there is little base for the economy to rest on. Governments must undertake reforms aimed at growing their countries’ export industries and reducing current account deficits, thus moderating the need for external credit.

The second factor is related to the nature of the Fed itself. The issue is not whether the Fed overstepped its mandate by undertaking QE, nor whether it should be more sensitive to the financial needs of the developing world (it is legally bound to promote full employment in the US, not elsewhere). The fact of the matter is that the global economy is overly-dependent on the dollar. Because the Fed controls the domestic and international supply of dollars, the fate of the global economy hinges on decisions made in the Fed’s central office.

What can bring the power of the Fed to a reasonable level and curtail the “exorbitant privilege” enjoyed by the US as the controller of the global reserve currency? A challenger must come to the fore, whether it is an existing currency like the euro, renminbi, or ruble, or a conglomeration of several currencies such as the IMF’s special drawing right. Too much power is held by too few individuals located in New York City, and the only way to rectify that is for a viable competitor to the US dollar to emerge.

I'm a graduate of the Master's program in International Relations at Central European University in Budapest. I spend most of my time traveling in Eastern Europe and the post-Soviet space, writing about politics and economics in Europe and the US.