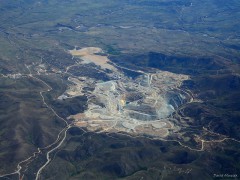 One old saying well know by Peruvians is: “Peru is a beggar sitting on a golden bench”. Even though its interpretation can be controversial, in some ways it represents an  idea that is well accepted by much of the population: that the country is poor because it does not know how to take proper advantage of its own resources. Yet it can also be taken to mean that the ordinary Peruvian does not take advantage of the resources of his or her country. So who really does benefit?

Peru has been a mining country since colonial times, and mining has recently experienced a boom [es], with multi-million dollar investment and large field operations. But some months ago, for instance, it was found [es] that a greater incidence of child malnutrition is only to be found in mining areas. And that’s not all: in 2011 the national extreme poverty rate was headed [es] by regions such as Cajamarca and Huancavelica, which are traditional mining areas.

Both cases are fairly typical of the problems related to mining in Peru. Cajamarca has been for months now the scene of continuing protests against Conga [es], a mining mega-project which, according to its opponents, will cause irreparable damage to the basin headwaters and   wetlands in the area, and severely affect the farmers and shepherds living there. On the other hand, the Santa Barbara [es] mine in Huancavelica was one of the most important during colonial times, and there are a number of mines belonging to the Buenaventura group, (owned by Alberto Benavides, the second richest man in Peru), currently operating in the region, as well as the Cobriza mine, managed by Doe Run, among others.

Inequalities of this kind have created a fertile breeding ground for Marxist-fulled terrorist activities. However, the business side offers a more practical explanation: modern mining operations require relatively few staff and these are usually highly qualified [es]; Business integration models make the impact of the acquisition of inputs in the area low while the tax structure means paying taxes to the country’s capital instead of paying them in the area.

The main mining companies usually dedicate a decent amount of resources to social and environmental recovery works (see Yanacocha [es] and Antamina as cases in point), but either they are not appropriately communicated or it is not what people actually expect. How else to explain the recurrent claims and protests against the mining companies?

The government generally brands anti-mining claims as “political“ [es], and as the work [es] of international NGOs; even the option [es] that it’s all about some kind of bad competitive practice between neighbouring countries has been aired. Mining businessmen, on the other hand [es], do not hesitate to praise the benefits brought by mining and insist that what is happening is a kind of blackmail by “anti-mining groups”.

The Defensoría del Pueblo [es] (Ombudsman’s Office), in the September 2012 [es] (PDF) issue of its monthly report on social conflicts details that there are 167 on-going social conflicts in Peru, 75% of which are socio-environmental conflicts, the area where most of the conflicts with mining companies are waged. This gives us a good idea of the fraught relationship between communities and mining companies.

Such conflicts have their origins in a number of factors including: pollution or risk pollution affecting economic activities or the population’s own lives; lack of what is called the  “social licence” [en]; and an improper redistribution of the benefits produced by mining, where more often than not, the community is just a passive observer standing on the sidelines with no active role to play.

Add to all this that in their desire to gain local acceptance, the mining companies usually divide the community into those for and against them, and we have a better idea about the situation that is repeated over and over again across the country. What’s more, by taking sides with the investors, the government is not seen as a valid mediator for solving the conflict either.

In short, we are in a kind of vicious circle. Communities want more and better services and living standards. To meet these demands, the government requires further investment and production. But this very investment is being held back by community protests which, for a number of reasons, are opposed to big projects for extracting the resources in their areas.

The government must take a key role in resolving this impasse by creating a better and much fairer legal framework for both companies and communities alike, as well as by acting as an honest impartial broker when it comes to conflict solving. But civil society should also play a responsible part by helping to empower the ability of local governments to make better use of the resources extracted, and by moving on from feeling like “a beggar on a golden bench” watching others take the wealth of their town.

Translated from the Spanish by Laura Rebollo.