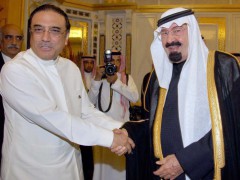 Esteemed as the birthplace of Islam and the nucleus of religious enlightenment with its sacred cities of Mecca and Medina and in particular the House of God – The Holy Kabáh, the country of Saudi Arabia stands is one of the most powerful and respected Muslim nations in the world. At the same time however, this professed righteous state questions the moral fiber as it disregards countless objectives from the Universal Declaration of Human Rights, and continues to sanction discrimination and violence towards women, minorities and migrant workers. This article will shed some light on the delicate issues of the Holy Land and the religious epitome it embodies in the 21st century.

Ever since it adhered to Islam some 1400 years ago, the country of Saudi Arabia has had a major influence on Islamic peoples all over the world. Noted today as one of the most devout yet insular countries in the Middle East, it has emerged from being an underdeveloped barren kingdom to becoming one of the wealthiest nations in the region. Saudi oil reserves are the largest in the world, and their investment, funding and aid for many countries all over the world is closely linked with the other countries economic backbone since it provides funds to many Muslim countries. Not only the Muslim world but also the West holds much of support in political allegiance to the Gulf States and in particular their good ally the powerful state of Saudi.  Thus with much dominance over its citizens and to an extent in the global platform, Saudi Arabia with sinister intention inflicts its staunch religious beliefs on the socio-political lives of not only its people but also the people from rest of the Muslim world.

Amid an extremely orthodox and distorted practice of its self styled version of Islam, the monarch Kingdom upholds its power by the demoralization of women and girls, degradation of emigrant workers, and restriction of sects such as those of Shiites, Sufi and also minorities of the other religions.  Some of the most contemptible ongoing violations by the government revolve around abuse of basic civil liberties of the people.

Now the Arab kingdom leads with deception, money and intimidation to influence individuals and groups in foreign nations to also practice the Saudi misinterpreted version of the Islamic jurisprudence and conduct and lead such violations, and un-Islamic practices into their societies.

In terms of deception, the image of a holy sanctuary the country is eager to present deters many Muslim states from disrespecting it. Nevertheless reverence to the Islamic state moved from being an aspiration to a necessity for the international Muslim community, as they pay allegiance to the Royal family as opposed to the religion itself. In terms of aid, Saudi Arabia donates to countless nations all over the world to lead the doctrine of Muslim radicalization. In 2010-2011 alone, Saudi Arabia gave more than US $361.99 million dollars for the Pakistani flood relief operation, topping the list of donating countries. Much of the revenue was used to provide food, shelter and education to the affected. Education means of course the Madrassa based belief system which embeds a more conservative ideology in the minds of the people. When both these tools of persuasion fail, the Saudi leadership never hesitates to quench any abrupt revolts be they within the country or outside. Protests in Saudi Arabia about injustice towards the people and Saudi’s involvement in Bahrain went on for quite a while causing civilian deaths and injuries in violation of international humanitarian law but they have received scant international attention. Armed forces from Pakistan were also called in to persecute and silence the demonstrators in Bahrain on the request of the Saudi government in lieu of extending its support to the Bahraini monarchy.

Rest assure though that not all protesters are have been intimidated into silence, as international groups like Freedomhouse and Amnesty International, along with local movements of the Shi’a community and others such as Women2Drive and Baladi continue their struggle to safeguard their rights and rise up against the tyrannical rulers of Saudi Arabia. Leadership and civil society in Pakistan should listen closely these calls coming from the Saudi people and become more aware of all the dire issues in the country that now ranks among the “Worst of the Worst 2010: The World’s Most Repressive Societies”. We should seek to have good relations with Saudi Arabia for reasons of realpolitik; we should not aspire to their idea of governance and way of life. Because at the end of the day, Pakistan is not self sufficient enough to do without the Saudi riyal and Saudi subsidized oil without which our whole economic system would grind to halt.

It is unfortunate that the land which served as the bastion and pioneer of human rights as laid down by the Holy Prophet Muhammad (PBUH) has drifted astray from all the religious conviction that made for its pillars of humanitarian worth. The 1400 year old sacred text of the “Charter of Medina” which explicitly and exuberantly emphasizes the on basic and comprehensive rights of woman, children, labor and even people from other religious affiliations and ethnicities has now sunk so low that not only does it fail to set the standards set on its own soil but fails to measure up to the objectives of the 1948 Universal Declaration of Human Rights of Geneva.

In delicate times like these it is our duty no to cave into pressure but to speak out and take action against such appalling injustice. Furthermore we have to work to revivify the basic tenets of the Islamic faith which are now being trampled on in the land of the Arab Kingdom and the rest of the world.