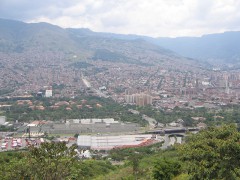 No matter how much it develops, improves, grows or changes, whenever people, including myself, write about the city of Medellin, Colombia, we inevitably fall back to comparing it to how it used to be, and point out that it used to be known for its violence, for its murder and as the hub of a massive drug trafficking industry. The National Tourism campaign underlines the past dangers with a slogan that says: “The Risk is Wanting to Stay…” Making the “transformation” the basis of the pitch to promote the city has helped to give it a coveted spot in discussions on international development; yet although it’s a well known storytelling trope, I think that even as the transformation seems to be helping the city, it’s actually hurting its citizens.

Most of us have seen how this plays out in areas at a wide remove from urban development.  Makeover shows don’t focus on average looking people to transform them into beautiful specimens: they use people at the bottom of the attractiveness scale to make the transformation as spectacular as possible.  Celebrity interviews tend to highlight rags-to-riches stories, the self-made-man (or woman) or how someone overcame great odds to get to where they are now. I personally love these stories, they make me feel like everything is possible if only you apply yourself and work hard.  It’s romantic to root for the underdog. This trend seems to prize hard work over results, the process over the finished product. So why do I think it could be hurting the citizens?

Colombia is a country that has struggled with terrorist groups, revolutionary armed forces and paramilitary groups for decades and that has evolved a wide range of policies aiming to convince those who join such groups to leave their weapons behind. Incentives include opportunities to study, to own a home, to start your own business and in many cases include stipends for people following the program so they aren’t tempted to return to a life of crime because of money issues.  I think this is a great program [es], and it has helped many people to turn away from violence to a life of peace. That being said, it is sad that these same opportunities are not available for all young people starting off in in life before they decide to turn to a life of crime through lack of opportunities!

A taxi driver in Medellin once told me a story of how this policy that helps others ended up hurting his family. In a city where only 26% of students are able to get into higher education and 50% of those end up dropping out, according to the regional Newspaper El Colombiano [es], opportunities for affordable study are highly sought after. His daughter was at the top of a waiting list for a state-run education program: if any of the students ahead of her decided to delay their studies or chose a different field, she would be in. And as it happened, several of the students dropped out: but at the last moment, a group of people from a reintegration program for ex militias wanted in, and they were given those spots ahead of the taxi driver’s daughter.  His words have lingered with me … what good had it done his daughter to study hard, work hard and do things the right way when a group of people who had made bad choices were now being rewarded for them, and were effectively deemed more important than a young woman with dreams and plans? He isn’t the only one to think this way. On the program website’s FAQ [es], there are three questions addressing society’s perception that these criminals are receiving advantages over the average citizen, while the government insists that they are just leveling the playing field. In this Catholic country, it seems that  the prodigal son is still the best loved child.

Since there are more people in Medellin wanting to study or work than there are places to accommodate them, the government has been assisting them in the creation of their own enterprises through micro-grants and entrepreneurship programs. These are the types of action that have benefited Medellin in the international eye as this article in The Guardian explains… which doesn’t forget the mandatory reference to the city’s past:

However, one important aspect of development strategy today, mainly taking place locally, involves trying to ensure future development outcomes are as equitable, sustainable and pro-poor as possible. A pioneer in this regard is Medellín, in Colombia. Once known as the most violent city on Earth, thanks to its narco-wars and paramilitary violence, Medellín has become something of a laboratory for heterodox local economic development policies paying very real economic and social development dividends, especially for the poor. A new paradigm of community-driven local economic development policy is perhaps in the making, with four key areas gaining ground.

It’s hard for businesses to thrive in Medellin, in what the article calls the “chasita economy”, where unproductive informal micro-enterprises fill the streets but don’t survive or thrive.  People working 16 hour days to sell their goods on the streets are working hard… but they aren’t seeing results, and, to give it credit, the government is indeed working on solutions to address this. In the meantime, these workers perhaps see their neighbors making easy money: through new pyramid schemes, prostitution, petty crime and robbery, drug trafficking or other shady or criminal activities. This is all happening in a city that is being lauded internationally for its transformation, and where businesses are rewarded for being lucrative and productive, not for the sheer hard work put into them. No wonder citizens are confused.

We live in a city and culture that prizes hard workers, yes, but only if they are successful. So whenever a story comes out like the one last week from El País in Spain about the 5,000 assassins for hire in Medellin, the success on which we’ve based our prestige as a city takes a tumble, and the city feels attacked [es] and unfairly portrayed [es] The “transformation” story doesn’t sell as well if things stay the same. The makeover is not complete.

Medellin will need to start telling a different story, for itself and for its citizens. A story of hard work, constant struggles and uncertain futures. One that prizes progress, even if it is just in small steps, and recognizes that success is not to be gauged in terms of fame and money alone.