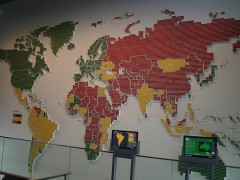 If you Google ‘freedom of speech in Russia” in English you’ll get over 6 million results about everything from the lack of free speech and human rights violations to the Pussy Riot scandal and much more. Google the same phrase in Russian and your results will be much more modest.

Sandwiched between Singapore and the Philippines, Russia scored 148 out of 179 on 2013 Press Freedom Index by Reporters Without Borders, while Freedom House labeled the country as ‘not free’. Why does Russian Google still give any results about freedom of speech violations? Shouldn’t it all be censored?

The answer is simple: the Kremlin isn’t interested in controlling the internet since it is devoting all of its energies to censoring Russian TV. According to one of the most recent surveys, around 43% of Russians above the age of 18 use the internet on a daily basis while the vast majority of Russians still watch television every day. Despite growing internet penetration, and the spread of blogging activity, the government doesn’t pay much attention to the annoying buzz of opposition leaders online.  Given the greater importance of traditional media, Russian authorities have decided to focus their formal and informal censorship activities on the TV. Spin doctors and loyal media owners are slowly turning Russian TV channels into one big absurd Fox News-alike media sphere. Meanwhile, endemic self-censorship in the media prevents reporters from covering certain issues for fear of their lives.

As the Bertelsmann Transformation Index (BTI) 2014 report on Russia points out, coverage of important events such as elections and protests are routinely manipulated. Right now Russian channels are busy covering events in Ukraine where Euromaidain protests have mushroomed across the country after the Ukrainian government suspended signing the association agreement with the EU. It’s obvious that the Kremlin isn’t exactly thrilled with the idea of Ukraine joining the EU and the fact that Ukrainians are protesting against the government, so the entire propaganda machine is now busy putting a negative spin on Euromaidan.

Let’s zoom in on how just one primetime show puts a spin on what’s happening in Ukraine.

In his attempt to dramatize the events, a controversial pro-Kremlin journalist Arkady Mamontov starts his weekly pseudo-investigative show called “Special Correspondent” by saying that neo-Nazis have become the driving force of the protest movement in Ukraine. “For the first time in post-Soviet history, Nazis are participating in public events,” he sighs and looks at the camera with a pained expression on his face.

Mamontov is a fierce supporter of classic conspiracy theories. His show attracts like-minded Putin supporters eager to tell the audience about some American/Zionist/Masonic or any other plot against Russia.

“This is an orchestrated attempt from abroad to illegally overthrow the legitimate government on behalf of those who lost the game in the foreign association of Ukraine and the EU,” Sergey Zheleznyak, one of the Russian MPs from the United Russia party, proclaimed on the Mamontov show.

“Is this a Nazi revival in Europe?” asks Mamontov ominously before playing footage from Maidan Square. A melodramatic correspondent talks to neo-Nazis, asks them to show their weapons and claims that their methods are supported by other protesters. He says that ‘old habits die hard’ and shows protesters drinking vodka while debating politics. Dramatic music followed by some scary images of clashes between the police and provocateurs is calculated to make your blood run cold. It is still unclear why the West should support neo-Nazis overthrowing Ukrainian government, but it doesn’t really matter.

The amount of absurdity on this show is simply unbearable. An ordinary Russian who doesn’t use internet as a source of news will have no idea about non-stop battles between the opposition and their opponents that happen online. Mamontov and similar TV shows can appear like a valid source of information for people who don’t know any better. By supporting the disorganized nature of the opposition and limiting its access to TV channels, the Kremlin is able to hold its grip over the TV channels in the country. Despite the fact that Russia is a part of a globalized world and the Iron Curtain is long gone, the government is still stuck in the past trying to fight imaginary threats and conspiracies, imagined and created by spin doctors.