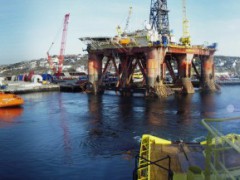 Only very rarely does it happen that the way two nations see each other takes a complete U-turn. But this has happened in Scandinavia. As a Hungarian currently working in Norway, I find this fascinating and I’ve tried to understand how such a turn is possible.

For centuries, Norway has been seen as Sweden’s little brother. Yet with the advent of oil wealth, this relation has changed completely: nowadays more and more Swedes are coming to work in Norway. So what do Norwegians think about this change?

The discovery of oil in Norway has completely changed life in the country. Photo taken by by Marcusroos on Flickr (CC BY 3.0)

Although Swedish and Norwegian cultures are very similar, there is one key difference, rooted in history. For a long time Sweden was relatively rich, more developed with more resources and with a lead position in the region (in competition with Denmark), while Norway was seen, slightly disdainfully, as a poor country of seamen and peasants that wasn’t even an independent state until 1905.

This picture completely changed shortly after the discovery of vast reserves of oil in the North Sea in 1969. Norway has now become one of the richest countries in the world with enough resources to build up a very generous welfare state. Moreover, welfare is here to stay: “The Oil Fund“, as commonly called, invests the surplus wealth produced by the Norwegian petroleum sector in order to prolong its benefits for future generations. Today Norway is definitely the richer relation – although the population of Sweden is still twice that of Norway.

The sudden arrival of paradise has inevitably caused changes in the Norwegian identity as well. This is very hard to gauge with any certainty so I can only present my impressions garnered from talking with Norwegians from all walks of life.

Swedish and Norwegian buses and drivers are lining up to serve the tourism industry in Norway. Photo: courtesy of Morten Larsen.

The first generation to be born in “the rich Norway” has now grown up and is used to the new situation. As the oil industry pays a significantly higher salary than the national average wage (NOK 56 000 or USD 9300 per month compared to NOK 36 000 or USD 6000), there is a something like a reverse brain drain in the country as skilled foreign workers flock to make up deficits the domestic employment market cannot.

A further factor is a mentality which we may call a kind of resource curse: many of the young generation say “my country is rich, so I don’t want to drive a bus – or work on a farm or work in any field that’s low-prestige.” This reluctance to engage in what are seen as lowly professions once again is fueling the influx of foreign workers.

(These two factors provide me, a Hungarian, with an opportunity in Norway. Those Norwegians who speak 2-3 foreign languages – which is necessary in the tourism industry – have a much better paid position all year round. Our company simply couldn’t find enough skilled Norwegians for this demanding seasonal work!)

Workers arrive from all over the world. The second biggest European immigrant group comes to Norway from next-door Sweden. And they are very welcome in Norway for a variety of reasons. The Nordic Cooperation makes the flow of the workforce among Nordic countries extremely easy, and there are no cultural barriers either. The Norwegian and Swedish languages are so closely related that a Swede can understand Norwegian without having to learn it.

Swedes don’t come to Norway to escape from the Swedish economic crisis. In fact, the economic situation in Sweden is enviable. They simply come to make more money, very often for short-term stays like for the tourism season. So very often they don’t put down roots in Norway – but even if they do, the greater part of the integration process has already been accomplished.

All they have to cope with is their hurt pride that Sweden is no longer the rich one in this relationship and the continual friendly mocking banter from Norwegians:

There was a sandwich machine in a Swedish factory. Sven didn’t quite understand what the machine was about though. He went to the machine and paid his ten kroners and got one sandwich. He was so excited, and paid another ten to the machine and received another sandwich. Finally he had a huge pile of sandwiches.
Another worker was wondering what Sven was doing:
– “Sven, don’t you think you should stop now?”
– “What the hell are you babbling about?! I am just starting to win big!”