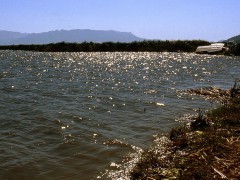 In 2004, Malawi’s population was estimated at 12.3 million with an annual growth rate of 2.1 percent. Malawi is the most densely populated country in the Southern African Development Community (SADC) region, with a population density of 104 inhabitants per square kilometer.. About 83 percent of the total population was rural, and 81% of Malawi’s economically active population was employed in the agricultural sector.

Agriculture contributed 37.6 percent of Malawi’s GDP (1.7 billion USD) in 2003. Agriculture accounts for about 90 percent of the country’s export earnings, of which tobacco comprised for 60 percent.

Malawi’s second-largest lake, Lake Chilwa, located near the Malawi-Mozambique border is shrinking, and not just seasonally. The lake, located in the eastern Zomba District, is about 60 kilometers long and 40 kilometers wide, the lake is surrounded by extensive wetlands. There is a large island in the middle of the lake called Chisi Island.

Possible factors include the climate change and declining soil fertility, which induce farmers to become increasingly dependent upon the lake for irrigation and fluctuations in rainfall levels, which alter the lake’s ecosystem.

Lake Chilwa is a shallow lake which shrinks significantly in the dry season, increasing greatly in volume during the rainy season. The lake is a center of sustenance and commerce, supporting 335 villages with over 60,000 inhabitants who participate in a thriving fishing industry. Additionally, the waters of Lake Chilwa are essential to local agriculture, especially as local farmers adjust to climate change.

The lake has no outlet, and is at risk for drying up if its waters are diverted for human use. The International Association for Great Lakes Research (IAGLR) has found that Lake Chilwa faces overfishing and increased degradation as the number of fishermen increases and as the population practices agriculture around the basin and inside the lake during the dry season. The full report can be found here.

This is salient because Malawi’s farmers overwhelmingly grow mono-cultures, and until recently, corn occupied 90 percent of cultivated land and comprised 54 percent of Malawian caloric intake, as covered in a previous article. However, in response to the global commodities market (cash crops like corn and tobacco saw prices drop, while cotton prices rose), many Malawian farmers switched to cotton mono-cultures, hoping that the profits would compensate for the risk they took in cultivating less corn (again, a dietary staple).

What happened instead is that cotton prices dropped, and many smallholder farmers are grappling with worsening food insecurity. The global price shocks are reverberating far beyond Malawi’s farmers’ profits.

Within context, it is clear that water issues of access, conservation and sustainability are central in developing nations that are more vulnerable to climate change and global price shocks in the commodities market. How, then, do we begin to address these myriad, overlapping issues?