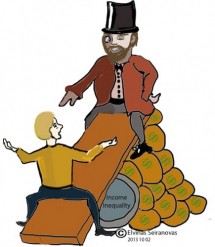 Income Inequality caricature, by Elvinas Seiranovas (made specially for this post)

Just like “sustainability”, “inclusive growth” risks being an empty signifier. So let’s start with an easier question: can a country both maintain growth and assure a high level of equality? History – at least that part of history where man has a say –  shows that growth plus equality is just as possible as growth plus inequality.

For better or worse, a large part of history is pointed towards the spread of inequality. Classical history, whether it be the Roman Empire, the river valley civilizations or empires that emerged along many of today’s great rivers, heavily relied on slaves for large public works or everyday household activities. Slavery allowed the masters to specialize and gain a certain advantage over their competitors. While the laws and forces to which slaves were subject have differed, and some slaves  such as Tiro, the slave of Cicero,  managed to gain his freedom and live a comfortable life till he died at the age of 99, at the time of Roman Empire [1], there was a clear division between the master and the ruler.

On the other hand, there are examples where civilizations flourished without an increase in inequality. Even though the United States did rely on slavery, much of its initial population were settlers trying to escape inequality and hardship in Europe. Inequality at the beginning of the 20th century was much smaller in the US than it is today, even though US was growing then, too [2]. Nordic countries have established pro-equality systems and even the rise of China and India as a whole can be considered a pro-equality movement, despite the great inequalities that are springing up inside these countries. Actually, a very simple regression can show that it is hard to find even a correlation between inequality and growth. If we take the Gini coefficients (a measure of wealth distribution in a society, where “0” means that society’s wealth is spread evenly and “1” means that all wealth belongs to a single individual) and compare it to the real growth rate of GDP (a measure of income), we will not be able to find any clear relationship. In fact, if we take the Gini coefficient and compare it to GDP growth per person, we find a negative relationship which is statistically significant [3], which implies that low inequality is actually associated with high growth [4].  Leading empirical research shows that while equality in low income countries may indeed discourage growth, equality for high income countries usually encourages growth [5],[6] yet the authors admit that inequality may have no effect on growth at all. I would not like to jump to any conclusions based on what the graphs below say. However, the point is that it is not so easy to show statistically that inequality only slows growth.

Yet, somehow, the above does not make sense. We saw socialism fail in Europe and Asia. We are seeing Sweden moving towards privatization. We know that people don‘t work as hard if they have to pay high taxes….Or do we?

To some extent, socialism failed because it was an extreme form of equality but partly also because it had political repercussions which in some way dominated the economic issues. Sweden lets private managers run companies, yet it has a high tax rate and still allocates funds across its population thus maintain a high level of equality. Furthermore, if the state provides a large share of basic goods, then every earned extra euro or dollar can go on very personal goods, such as skiing resorts or fancy homes – something that is still wanted and motivates people in general.

Economic theory is not so crystal clear on whether inequality is good or bad for growth. On the one hand, distorted taxes demotivate people to work while an initial concentration of capital (i.e. an initial form of inequality) is necessary to construct a business, and thus one firm or individual accepts the risks and the potential profitability that go along with the project. On the other hand, businesses need a well educated workforce and other public goods (security, etc.). On paper, if tax funds are used wisely and invested in education, infrastructure, and secure legal systems and so on, society does not lose at all. This may explain why wealthier societies tend to be moving towards equality to retain growth while poorer societies need inequality to jump start growth.

Inequality and growth are likely to be, as they have always been, a topic of intense economic and political debate. However, without a clear answer from history, I would leave this question to the individual – even if an economy grows slower, how much of that growth would I not mind forgoing to aid my neighbours and my community? Personally speaking, I think I could spare quite a bit.

[4] Even though I took all estimates of all the countries on the World Bank database, only 43 different ones were available, so I took observations from 3 different years for each one (2000, 2005,2010).