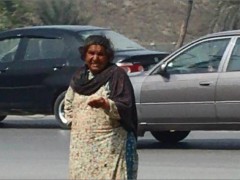 Poor women in Pakistan are easily noticeable in the hustle bustle of the city yet at the same time they’re easily ignored. Photo by S. Aown Shahzad

Poverty in Pakistan can be noted as endemic — spreading across the country at an alarming rate. In a population of 180 million, Pakistani people living below the poverty line account for 21% of the entire population according to the World Development Indicators (WDI) 2013 report by the World Bank.

In circumstances like this, urban areas in Pakistan prove to be less effective at providing equal welfare opportunities than some other countries. The socioeconomic disparity between the poor and the rich is ever high, as stated by the UNDP, but what’s even more unfortunate is that even among the poor, gender biased inequality is widespread. While the doors of opportunity for men are fairly open, women find it increasingly difficult to break through their economic status. In such a situation, Pakistani women have to be exceptional in order to rise above their financial circumstances and reach a better lifestyle.

The poor urban women of Pakistan are strong, independent, and inspirational in their own right, but in times like these, when the population is expanding and the economy is not, women tend to suffer the most. In a study conducted under the Collective Social Science Research entitled “Women and Paid Work in Pakistan,” it was found that the majority of the women working in major cities in Pakistan do it out of economic need and tend to face a hostile environment of limited employment options, unequal wages, and bad working conditions. The most difficult responsibilities of a poor woman in an urban city are the double burdens of labor due to unremitting domestic responsibilities at home.

For most women, breaking the poverty line is a dream that will never come true. As it is, for them, moving to a city and working endless hours is just a means to secure one night’s food for their families and themselves and not a means to gain a better standard of living. Unfortunately, the future of poor girls is as grim as that of poor women. Most young girls take up jobs as domestic help early on, and with age, they fulfill the same roles their mothers did.

But what are these jobs that poor women can gain in a city?
Let’s have a look at some of the common roles they fill and the opportunities and challenges that come with them.
Female Vendors

Poor women working in the cities of Pakistan are known to be self-employed due to the increasingly tough job competition found in urban areas as noted by research entitled “Urbanization, City Growth and Quality of Life in Pakistan.” These women usually set up small businesses like fruit, vegetable, or flower vending in makeshift portable shops. Moreover, women can also be seen on the roads working as street vendors selling items like pens, hair clips, brushes, and other goods.
Domestic Help

In Pakistan, the extreme economic disparity is leading to a higher percentage of domestic workers in the cities, with women filling this job sector more so than men. Poor women in cities take up work as domestic help in households where they cook, clean, babysit for children or elders, and do all other household chores. Paid nominally and overworked, the women tend to suffer a lot. In a study by the Alliance Against Sexual Harassment (AASHA), it was found that up to 91% of the female domestic workers in Pakistan claim to have been sexually abused by their employers. But work as domestic help is still sought-after due to the perks of receiving food, lodging, and other certain benefits from the household that employs them

Another field of work sought by women is that of services. In this field, poor women who are skilled take up work as tailors or sales women, or they create handicrafts that they then sell through a middleman. Young girls can also be seen with their car washing materials on the side of the road, providing the car screen cleaning service on almost every other road in the cities.

Female labor force participation in the country is continually decreasing and is now at 14.3% nationally with significantly less participation in urban areas as compared to the rural sector according to the Pakistan Bureau of Statistics. However, women migrant workers from rural areas coming to cities are economically more active after migration, working under wage employment and proving to be productive due to the availability of labor market participation and the relative ease of urban work as compared to rural work. Thus, this makes labor for women in the city much more attractive than labor in villages.

Cities in the developing world, with their thriving consumption and production, tend to produce more than they reduce. In such circumstances, poor elderly women or very young girls with no skills and a lack of opportunities take up the work of garbage pickers. This profession is the only one that they can attain with ease, but unfortunately, the risks for poor women working as garbage pickers are very high. Medical and other harmful waste is often mixed in with domestic waste, which leads to high chances of contracting Hepatitis, AIDS, and other disease while carrying out the task of garbage segregation.

People travelling from one place to another, otherwise known as gypsies, can also be found in the cities of Pakistan. The women of these urban gypsies tend to search for the areas in the cities that are best for settlement. These are empty parking lots, abandoned malls, and even side roads within cities where traffic flow is low. Even though these women do not work, they have learned to survive effectively in the urban areas of Pakistan.

When all else fails, the cities of Pakistan, with their booming populations, present the poor populace with the dependency of living on charity. Now noted as a profession within the country, poor women with their infants in their hands walk down on the streets and stand outside buildings begging for money. Even though begging cannot be categorized as a job sector, the income generated by these women is generally close to or even slightly higher than some of the other fields of work mentioned above.

In the end, poor women in Pakistani cities have to suffer a lot only to gain minimal income. Thus it is not shocking that the Global Gender Gap Index found Pakistan to be the second-worst country for gender equality this year.

There’s still a long road ahead for this region to reduce the economic disparity between the rich and the poor, but that is not as tough as eliminating the sexism that is inculcated in the society.