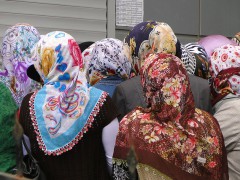 Women in Eastern Anatolia in front of a government office: One out of seven women in Turkey cannot read and write. The figures increase while going from city to countryside, young to old and west to east.
Photo by Adam Jones [CC BY-SA 2.0, via Flickr]

Ayşe[1] is a poor woman living in Ankara. Born in a rural area in Eastern Anatolia, she immigrated to the capital with her family when she was a child. She has only received a basic education as higher education was unthinkable for her poor rural family. She is an Alevi, a historically oppressed Shiite ethno-religious minority in majority Sunni Turkey. At a very early age, she married a man from the same area and ethnic background and gave birth to two children. Her husband works at a gasoline station for a minimum wage, which is around 400 Euros a month and the only official income for her family of four. Normally, she does not work. But this had to change at some point.

I got to know Ayşe because I am one of the two people for whom she has recently started to work as a domestic help. The reason? Her elder son is starting university. Traditionally a housewife, there is nothing else Ayşe can do to earn a living. She lacks the social network –and background- to be employed in the city’s oversized public sector; neither does she want to work five days a week as this would mean neglecting her home duties and her younger son who has had to repeat a year at school. Both parents worked hard and saved for two years to pay for the university preparation courses of their hard working elder son. The private courses and cram schools, which are an essential part of the two-year preparation for university entrance exams, place a significant burden on the shoulders of poor families like hers. Yet, she knows that succeeding in this grossly unfair educational system is the only way her sons can escape the poverty trap.

This summer, all that hard work finally paid off. The elder son obtained the right to study engineering at one of Turkey’s well endowed universities. However, there is a catch: his university is located in another city. Despite the Prime Minister’s recent claims[2] that every student can get a subsidized room in a dorm and a stipend, he got neither. He will have to move into a shared flat, which will be another burden on the already strained family finances. Worried and unsure about what to do, she asked me one day whether she couldn’t work at a temporary job during the week and come to me on weekends. But then she gave up on the idea because her elder son asked her to stay and make sure that the younger one, who is more enthusiastic about participating in protests than succeeding at school, does not become a lost cause. She is currently sounding out her network for well-off generous people who may give her son some personal scholarship. I am trying to help her search, yet whatever solution we may come up, this will not change the fact that millions of poor women in Turkey share her problems.

Like her, most women in Turkey have limited education, much lower than men. For a country whose adult population received an average education level equivalent to that of a 7th grade dropout, this means that the majority of adult women have not received any education beyond the elementary stage. The illiteracy rate, which hovers around a mere 3.6% for men, is 4 times higher (14.7%) for women. In other words, one out of seven women cannot even read and write. Decades of neglect in educational policies coupled with the indifferent or even contemptuous attitudes of traditional families towards their daughters’ education have resulted in such a gross disparity. Despite successful efforts to achieve equal education enrollment for girls and boys, the gap still remains at the tertiary stage where the ratio of girls to boys in universities is 0.82 despite recent increases.

Low education levels, coupled with traditionally negative attitudes towards female employment push women far out of the job market. The labor market participation rate of women in Turkey stands at 28%, a figure lower than that of all European countries. Yet, even for those fortunate enough to have overcome social and structural barriers to work, the prospects are not so bright. According to a recent report, 27% of female employment in Turkey is in the informal sector, which does not include domestic work. As a part of the grey economy, these women are not covered by social protection, and they do not receive any western-style welfare benefits due to the weakness of the welfare state in Turkey. Even those working in the formal sector face a wage gap of 25%, as compared to 17% for women in the EU. Although gradually narrowing with the advancement of education levels, these gaps in education, work and income define the limits that women like Ayşe can reach during their lives. For her, the limit is not too far. Her only hope is that her children and grandchildren will not face the same set of constraints that she does.