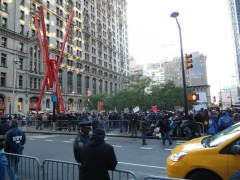 I just came back from Occupy Wall Street at Liberty Square in Manhattan. There were thousands of people – but only thousands! Why weren’t there tens of thousands? After all, a city like New York should be able to mobilize far more people then just enough to fill a small park squeezed in between skyscrapers.

Besides the obvious explanation – that New Yorkers are basically too busy to protest – I think the deeper reason is that New Yorkers – and for that matter Americans, Westerners, and the greater part of the world population including developing countries (who am I to blame them?) – are still entrenched in an outdated economic model and do not see the need for a deep rooted paradigm change.

For a while now, and especially since the OWS events, I have been wondering about the compulsiveness with which corporations and the people who represent them are always trying to deplete every resource they encounter and squeeze every penny out of anybody who comes their way.

I found a very concise answer to this in Jacinta Escudos’ blogpost “Small is better for a Greater We” here in Future Challenges [thank you, Jacinta], which refers to the economist E.F. Schumacher who developed a set of principles he called “Buddhist economics”.

In his seven points on “The differences between Western Economics and Buddhist Economics”, he explains simply and strikingly the underlying principles of the “THEY” – the corporations – and what kind of thinking could or should be the foundation for the “GREATER WE”. For instance: “…The second significant difference is that Western Economists give importance to maximizing profits and individual gains while the underlying principle of Buddhist Economists is to minimize suffering (losses) for all living or non- living things…”

What we need is cultivation of corporate social responsibility. But this can only happen if the people at the head of corporations start thinking and acting in a socially responsible manner.

THE GREATER WE starts with a smaller me

– As difficult and far-fetched as this seems to be (just kidding).

In other words, I have to take the first step. Not you, not they, but I.

To achieve my smaller me, I’ve taken a few humble steps, the most important in my opinion was to finally become a vegetarian last year – something I’ve been meaning to do for the past 25 years. Other steps include avoiding buying goods and foods packed in plastic wherever possible, using environmentally friendly cleaners in my small guest house, and being an generally ‘conscious consumer’.

A very good starting point to evaluate one’s own needs and wants is this article about simple living. Towards the end, James Robertson is cited  saying “that the shift to sustainability is likely to require a widespread shift of emphasis from raising incomes to reducing costs”. As simple as that.

Here’s another great little article about “Having, Needing and Wanting”.

Of course the best way to implement this kind of thinking is to start with children: “…The Bent Given by Education Will Determine All That Follows…”
The filmmaker David Lynch goes a step towards the “Middle Way of Living” with his foundation where he has successfully introduced Transcendental Meditation into hundreds of schools.